Graham was one of the people who helped Boris win the 2019 election...here is some of his post-match analysis

Stephen Dunn didnâ€™t intend to be the face of the 2019 election, but he was nevertheless. Stephen is the manufacturing worker from Wilton Engineering who defiantly held up a massive hand made â€˜We Love Borisâ€™ sign when the Prime Minister visited in the second week of the campaign. I was proud to have been there when it happened and help organise that particular visit, but I donâ€™t mind telling you I cannot take credit for the sign or the photo. In truth, the image is more powerful for being entirely authentic. The lads were told of the visit with only two hours notice, they were allowed to ask the Prime Minister any question they wanted, there was no attempt to fix the questions. The only condition attached was no swearing or abusive language as the company was live on TV. The questions came thick and fast, was Boris going to keep trident, as these workers supported the defence sector? Was he going to cut tax just for the rich? Which led to his NI cut announcement. Was he going to sell the NHS to Donald Trump? (that was Stephenâ€™s question.) After undertaking a set of the usual sceptical TV interviews Boris was about to get on the bus when Stephen, with his sign, asked for a picture with the lads. Boris readily agreed. The photo was featured in every newspaper the next day and even placed on the cover of the manifesto. It is gritty, honest and depicts a connection between this Prime Minister and the people that words fail to express.

Nobody in politics in the North East could have predicted the seismic shock of the 2019 General Election. There are now an equal number of Conservative MPs across the North of England to Labour, 20 each. You could walk from Redcar to Workington without setting foot in a Labour seat.  In constituency of Bishop Auckland the new Conservative MP, Dehenna Davison, has a bigger majority than even the Prime Minister. It will take a while for the former North East political establishment to take this in. But it shouldnâ€™t, because it has been building for 15 years; in my view since the landslide victory of the â€˜North East Says Noâ€™ campaign against Labourâ€™s Regional Assembly proposal. From 2004 we seen the gradual political erosion of  â€˜traditional working classâ€™ Labour support. In 2010, Cameron was elected with a tiny number of Conservative MPs, their strength increased in 2015, then the EU Referendum with more of the establishment-rejecting votes from the North East, then, Mrs Mayâ€™s election when, despite losing one seat, the Conservative vote in the North East actually grew due to support for Brexit. Finally, 12th December 2019, when political realignment has happened decisively.

Boris understands that politicians are only ever lent their votes by the people. They are not a commodity to be owned or traded, they are an expression of support that must constantly be earned. That said, the experience of Tony Blair in 1997 leads me to believe that, provided he continues to deliver policies in tune with expectations, Boris will keep this support in five years time. I remember being with William Hague in the 2001 election and being truly shocked that formerly safe Conservative seats in the South of England that Blair had won in 97, did not return to the Conservative fold. Blair performed well in his first term and was rewarded with continued support. The same can be true of Boris.

I was at the count in Darlington on election night; as the boxes emptied it was clear the Conservative had won, but the strongest support came from the so-called working class areas. The middle class areas were still voting Conservative but in proportionally fewer numbers. The relentless sniping of some liberal broadcast media, from Channel Four to Newsnight, had more effect on these voters than the gut votes of people who follow the issues but have more important things to do with their lives than debate Brexit or progressive politics at every moment.

Labourâ€™s left wing MPs were never as popular as they thought they were. Labourâ€™s Laura Pidcock famously said she could never be friends with a Tory; an unfortunate statement given that it now appears there are so many in her former constituency! Labour were clearly out of tune and out of touch with the Northern electorate. The left are blaming their loss on Brexit or on Jeremy Corbyn, but it was also because there was a positive Conservative message. The Conservatives had credible Northern candidates, a credible and straightforward manifesto, a popular leader and a determined campaign. It is no good just saying the Labour Party lost; if Labour continues believing that Boris only won by default they will cement his victory and make it more certain next time.

The regionâ€™s new Conservative MPs took the train to London on Sunday, ready to do the peopleâ€™s business. Not only will they â€˜Get Brexit Doneâ€™ by taking us out of the EU on January 31st, but Boris will answer Stephen Dunnâ€™s question on the NHS by legislating for it to be funded properly for years to come. I wrote in August that Boris intended to deliver the results people expect and deserve, now he has the peopleâ€™s votes to enable him to do so. 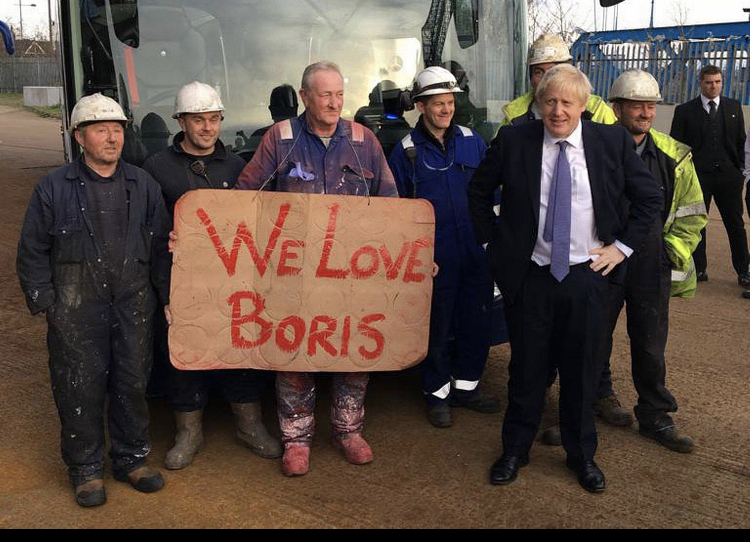