HS2: Time for the axe

Iâ€™ve used this column to discuss many current topics, but through the last ten years I have never given my view on the subject of High Speed Rail 2. I used to chair the Institute of Directors in the North East and during that time it was the only national business organisation to adopt a sceptical stance. When the IoD surveyed its members before the project began it found that just 27% felt HS2 represented good value for money and 70% said the scheme would have no impact on the productivity of their business. This caused the IoD to brand the project a â€˜grand follyâ€™, but making the argument was always finely balanced as, in this region, some were convinced it was in our long-term good. HS2 advocates had toured the factories and the hints of supply chain contracts had the effect of muting the criticism.

The truth, as I see it, is that HS2 is a big expensive project, some say it will cost up to Â£100 billion, which soaks up the budget of the Department for Transport leaving meagre pickings for other projects.

The HS2 project is supposed to link London to the North of England via Birmingham. Its advocates have stressed the speed, innovation and modernity it will bring to our rail transport infrastructure. They have also emphasised that it will dramatically increase the capacity of the entire network.

The project was first mooted by the last Labour Government. In fact Labourâ€™s last Trade Secretary, Lord Mandelsonwas a keen supporter many years ago, however in July 2013, he admitted that the cost estimates were â€œalmost entirely speculative\" and said the Labour Government had only proposed it to â€œpaint an upbeat picture of the futureâ€, during the financial crash. George Osborne used the project to offset claims that austerity would destroy long-term investment and it became a ministerial jingle that was used to rebuff critics of cuts elsewhere.

Today, at this moment of change in our national life, we have one last chance to take a fresh look. The forthcoming change in Prime Minister gives the Government an opportunity to pause and review. In my view we need to bring the entire thing to an end. Letâ€™s take from it what we can. The lessons on the need for more rail capacity, the technical surveys of ideal rail routes, the knowledge that growth in rail passengers has outpaced even the optimistic projections at the time HS2 was first suggested, and the most important thing; the unspent money that can do so much more good elsewhere in our transport system.

Big projects like this have a life of their own. They create a political vortex from which it is almost impossible to escape and, despite widespread opposition, the entrenched advocates in the heart of the Government machine try to find a way to carry on. They also convince surrogates to make their case for them. Andy Burnham, the Mayor of Manchester, appeared on TV this weekend and, despite previous scepticism, made the HS2 case. Not surprising really; the trains are due to stop in Manchester. The HS2 case for the North wonâ€™t apply to the North East for many generations. Iâ€™m 55 and I bet Iâ€™m retired before I could take a trip on an HS2 train that connects via this region.

The primary case for scrapping the project is based on what else could be done with the money. It should all be spent on transport, and the resulting transport dividend should be spent in the North thus tackling the yawning North South divide. Iâ€™d look at projects like increasing the capacity of the east coast line, Northern Powerhouse rail to improve East- West links and, crucially, on road schemes such as the Tees crossing.

The longer this massive project takes to build, and it has been more than ten years in the concept and planning, the more technology makes it potentially redundant. The original promoters talked about faster journeys; well Iâ€™m more interested in reliable journeys that allow working on your computer using high speed internet. Besides, will all journeys be taken by road and rail in a generation to come? Uber have just launch Uber Elevate, a system of flying taxis using small electrically powered vertical take off planes. This is not science fiction, the first test schemes start next year with the first commercial journeys in 2023. Several world cities, including Melbourne, Dallas and Los Angeles, have agreed to allow the service to start trials. The projected journey costs will start at Â£4.20 per mile but fall to around Â£1.80 per mile; if that happens it will be around double the cost of a first class train ticket, for which Â£1 per mile is not uncommon and make it of real interest to business users.

Money has already been spent on HS2, several billion pounds. Despite the schemeâ€™s unpopularity, scrapping it would be far from straightforward, more than 900 properties, at a cost of Â£600m, have been bought up to make way for the route. But as all people in business recognise, you shouldnâ€™t send good money after bad. It is time to cut our losses, save billions and redirect the money to numerous more practical and worthwhile things 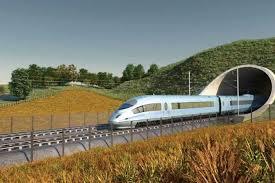