The chief executive of Arqiva, the company which operates Bilsdale Mast, today met representatives from local authorities, housing associations and charities from across the region to set out proposals to restore TV services and help the most vulnerable groups affected.

Paul Donovan met representatives of 15 regional organisations from across the region a week before an 80-metre temporary mast, near the original site at Bilsdale, is expected to restore services to more than 95% of households.

Bilsdale Mast was damaged by fire on August 10th, since when the company has been working around the clock to restore vital services to those affected, including by erecting more temporary masts at Eston Nab, Sutton Bank and other sites.

As well as updating the group on progress around ‘Project Restore’, Mr Donovan set out a campaign to engage local communities to help those people who will still not have a full service once the temporary mast is switched on. A dedicated call centre will open shortly, and a new online hub will be launched providing updated information and a place where people can register their postcodes and details to get support.

Those attending were shown detailed maps of the region setting out the likely impact of the temporary mast’s switch-on, and the areas which contain so called ‘not-spots’ of coverage which will need further intensive support. Engineers will be sent out to help households.

At the outset, people aged over 65 and those whom are either clinically vulnerable or vulnerable will be prioritised for support.

Mr Donovan also announced initial support of £150,000 for three regional charities, Two Ridings Community Foundation in North Yorkshire and County Durham Community Foundation. Each organisation will receive £50,000 to help identify those vulnerable people affected by the loss of their TV service, and to support work on digital inclusion and social isolation.

Paul Donovan said: “It was extremely helpful to have the support and input of our partners and stakeholders across the area as we work to fix this together. Arqiva is absolutely committed to restoring services to those who are affected as quickly as possible, and to supporting the most vulnerable people as a priority.”

Jan Garrill, chief executive of Two Ridings Community Foundation in North Yorkshire, said: “Television is so important to people in North Yorkshire, and especially the elderly who rely on it for companionship. This donation from Arqiva is very welcome, as is the plan to restore services, and we will work with the company to provide help and advice to those who need it most.”

Michelle Cooper, chief executive of County Durham Community Foundation, said: “This plan to restore services and this support is extremely welcome and much-needed. Television is vital to many people in County Durham, and especially to those who rely on it for companionship, preventing the isolation that comes from the loss of a TV signal is very important.”

Helen Hunter, chief executive of North Yorkshire and Darlington Age UK, said: “We mustn’t forget those people across our region who do not have digital connectivity, and for whom TV is a really important service and part of their lives. These funds will help us bridge that local digital divide. While Arqiva is making progress, we all need to help with the efforts to restore this vital service as quickly as possible.”

The Bilsdale mast is the tenth tallest structure in the UK at 314m (1030ft) tall. (Arqiva operates nine out of the top ten).

It provides Freeview TV, digital and analogue radio signals to the region, as well as mobile and some other ancillary services that require a broad reach.

Over 600,000 households are served by signals from the mast, however, it is worth noting that not all of these are solely reliant on Freeview for TV services (being able to access online services/players, the Freeview app, Freesat or subscription satellite or cable services).

Within 10 days of the fire we had returned some Freeview television signals to an area containing around 400,000 households. As of 08 September that number increased to over 500,000.

There are 14 direct relays (15 in total) which receive a signal from Bilsdale and pass it on to smaller areas, they have all now been restored.

We have worked around the clock to restore Freeview services for people, and many have been able to make use of alternative means of delivery such as smart TV players, Freesat, wifi-enabled dongles or their subscription cable or satellite services.

Arqiva is at the heart of the broadcast and utilities sectors in the UK and abroad, providing critical data, network and communications services.

We work in partnership with our customers – major broadcasters and utilities like the BBC, ITV, Sky, Global, Bauer, Thames Water and Anglian Water – to meet everyone’s demand for information, content and entertainment and enabling a switched-on world to flow.

We are the only supplier of national terrestrial television and radio broadcasting services in the UK, consistently delivering digital TV, analogue and digital radio to people in all four corners of the country. We distribute over 1,000 channels internationally using our fibre and satellite infrastructure. Our advanced, secure and dedicated networks are also supporting the management of critical data for a range of smart metering networksin the energy and water sectors.

For more information, news and insights from Arqiva, please visit the website at: www.arqiva.com 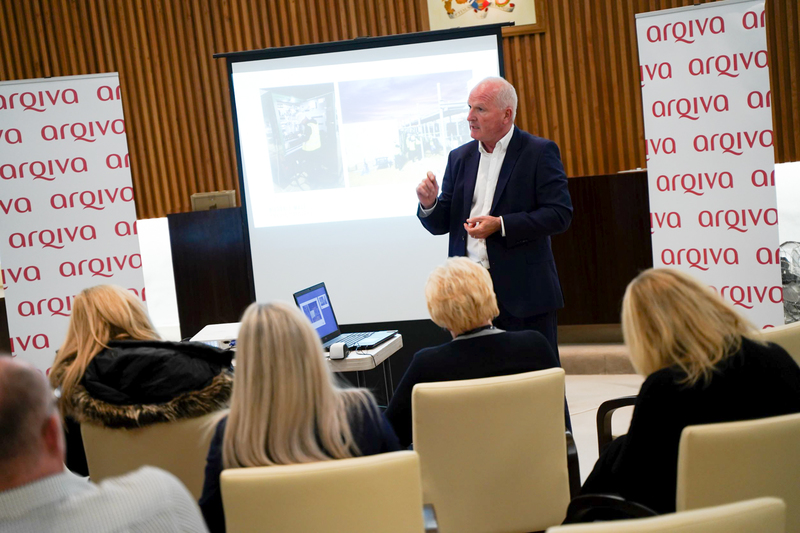