A present from Christmas Past as Black Sheep brings back York Brewery’s festive beer, Snowflake

Following its acquisition of York Brewery earlier this year, Masham-based Black Sheep have revived the beer, which was a regular addition to pubs and bars around the city each Christmas.

Taking its place in the festive line up alongside Snowflake this year is Black Sheep Brewery’s own Christmas beer, Blitzen.

Brewed in its Masham microbrewery, the 4.0% ABV ruby cask beer features Cascade and Goldings hops plus light and dark Muscovado sugar to give the beer a distinctive Christmassy richness. Its complex, malty taste is driven by a mix of pale, crystal and pale chocolate malts, with a hint of citrus and mixed peel.

Jo Theakston, Sales and Marketing Director at Black Sheep Brewery, said: “One of the first questions we were asked when we acquired York Brewery was whether Snowflake would be back in pubs at Christmas and I am delighted to give beer drinkers the present they wanted!

“Snowflake is a much-loved beer and we are delighted, which, along with Blitzen, takes pride of place in our seasonal calendar to give customers a greater variety of tastes and experiences when they visit the pub this Christmas.” 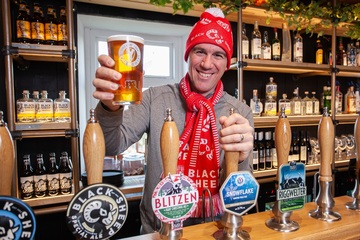