Back Of The Net For Black Sheep Brewery

NEWS RELEASE: ISSUED ON BEHALF OF THE BLACK SHEEP BREWERY The Black Sheep Brewery, based in North Yorkshire has secured a fantastic transfer deal to appear at Leeds United’s Elland Road stadium. Two great Yorkshire icons have teamed up to have Black Sheep Best Bitter as a permanent fixture in the club’s renowned Billy’s Bar. Two &#39dazzler' handpumps, which are modern illuminated hand pumps displaying the beers logo, pour pints of Black Sheep Best Bitter for fans on match days and also everyday for the general public. Passionate Yorkshire men and women can now drink the traditionally brewed beer, which is brewed in Masham, on the doorstep of the Yorkshire Dales, whilst toasting their team’s performance. Black Sheep Best Bitter is full of Yorkshire character and is brewed using traditional high-quality raw materials, crystal clear Dales water from the Brewery's own well, Maris Otter malted barley for extra flavour, some wheat to fortify the beers' natural head, a little roasted malt for colour and flavour, and generous amounts of whole English hops Coupled with these top quality ingredients, Black Sheep uses the unique Yorkshire Square fermenting system which creates such archetypal Yorkshire beers. Jo Theakston, Marketing Director for Black Sheep Brewery said, “We are really pleased to have our beer as a permanent listing at Elland Road. The Black Sheep Brewery is extremely proud of its Yorkshire heritage which goes back over six generations of brewing in Masham, so it's great to be involved with one of Yorkshire's most famous and iconic football clubs. “We hope all customers of Billy’s Bar enjoy the beer and hopefully it can be used to toast Leeds promotion back to the Premier League at the end of this season…fingers crossed!” Leeds United's managing director of hospitality and catering Norbert Pichler said; “Having Black Sheep Best Bitter available in Billy's bar is very fitting. It’s great to have two symbolic features of real Yorkshire society, working together. We have had a really good reaction to the beer and I’m sure this will continue among our fans into the season.” ENDS CONTACT: Melanie Smith on 01325 363436 Notes to Editors: The Black Sheep Brewery in Masham made its first beer in 1992 after being built up by Paul Theakston, whose family had brewed in the area for six generations. In a world of ever increasing bland, mass-produced beer Paul saw an opportunity to return to what his family had done best since 1827, making real beer in the time-honoured fashion. An old maltings building, once part of Lightfoot's Brewery became the Brewery’s home. This landmark building, which stands high over the banks of the Ure, had fallen in to disrepair as years of neglect as a semi-redundant grainstore had taken its toll. Paul assembled a small team around him to fight the rats and build a traditional country brewery. The Black Sheep Brewery name derived from Masham’s association with sheep, but ‘Sheep Brewery’ didn’t quite sound right, so with a little creativity from Paul’s wife the Black Sheep Brewery was born, a name that sat well with the area, spoke volumes about the maverick attitude to the multi-nationals seeking to dominate the brewing industry and captured the essence of the family struggle that led to our birth. Black Sheep Ale at 4.4% ABV, now in an eco-friendly lightweight bottle, continues to maintain its presence among the top ten premium bottled ale brands, and is available nationwide from virtually all the major supermarket retailers. It is a classic premium bitter and as with all Black Sheep beers, full of character derived from the best possible brewing materials, plenty of time and patience in the brewing and our very special Yorkshire Square fermenters. Twitter: Facebook: Share 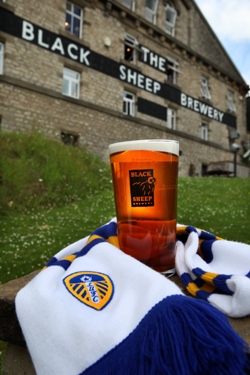