NEWS RELEASE: ISSUED ON BEHALF OF THE BLACK SHEEP BREWERY The Black Sheep Brewery has further developed its quality control with the qualification of 13 of its employees as professional beer tasters. The qualified tasters will form the first Black Sheep flavour profiling panel. This new panel of experts will be involved in ensuring the consistent quality of the brewery’s famous bottled beers. The panel will be in addition to the current taste panel which checks products across cask and bottled beer on a weekly basis. Members of staff from across the brewery underwent a taste profile training course led by Brewlab, a training and analysis service for the international brewing industry, based at Sunderland. After several weeks of training and an intense exam all those who applied passed with flying colours. The 13 employees who took part were from several different areas of the brewery including sales, accounts, administration and production; they were Dan Scott-Paul, Nick Chilton, Chris Pearson, Glen Simpson Steve Wilson, Dave Balbach, Nancy Burrage, Ben Fairhurst, Steffen Headley, Beth Day-Preston, Phil Douglas, Craig Rankin and Phil Bebbington. The course consisted of several lectures about the theories behind taste and how to distinguish different flavours when profiling beer. The course ended with an exam which all participants passed and resulted in Beth Day-Preston and Nancy Burrage, the only two female tasters, scoring the highest marks in the group. Phil Douglas, Brewer at The Black Sheep Brewery, who received his qualification, said: “This is a fantastic achievement for all those who took the course. We have a really diverse cross-section of people from the Brewery who qualified and this will be a great benefit when profiling the beers. “The Brewery already has a tasting panel which is extremely important to the quality of our products. The new flavour profiling panel will be a great addition to this and help to further the brewery’s developments as well as continuing to maintain the high standards of product output. “Having people with a qualification in tasting beer highlights the brewery’s commitment to quality and it’s certainly good work if you can get it!” For more information on The Black Sheep Brewery please visit: www.blacksheepbrewery.co.uk Contact Melanie Smith on 01325 363436 Notes to Editors: The Black Sheep Brewery in Masham made its first beer in 1992 after being built up by Paul Theakston, whose family had brewed in the area for six generations. In a world of ever increasing bland, mass-produced beer Paul saw an opportunity to return to what his family had done best since 1827, making real beer in the time-honoured fashion. An old maltings building, once part of Lightfoot's Brewery became the Brewery’s home. This landmark building, which stands high over the banks of the Ure, had fallen in to disrepair as years of neglect as a semi-redundant grainstore had taken its toll. Paul assembled a small team around him to fight the rats and build a traditional country brewery. The Black Sheep Brewery name derived from Masham’s association with sheep, but ‘Sheep Brewery’ didn’t quite sound right, so with a little creativity from Paul’s wife the Black Sheep Brewery was born, a name that sat well with the area, spoke volumes about the maverick attitude to the multi-nationals seeking to dominate the brewing industry and captured the essence of the family struggle that led to our birth. Black Sheep Ale at 4.4% ABV, continues to maintain its presence among the top ten premium bottled ale brands, and is available nationwide from virtually all the major supermarket retailers. It is a classic premium bitter and as with all Black Sheep beers, full of character derived from the best possible brewing materials, plenty of time and patience in the brewing and our very special Yorkshire Square fermenters. Twitter: Facebook: Share 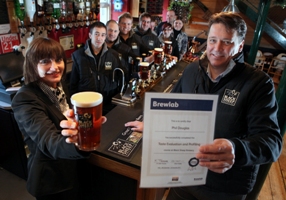