Black Sheep is brewing up a ‘frighteningly good’ seasonal ale for autumn.

A 4.1% ABV, frighteningly good, rye red ale, brewed with Summit, Amarillo and Chinook hops, Reaper will be launched to coincide with Cask Ale Week, which runs from September 25th to October 5th.

Reaper follows hot on the heels of Velo, Black Sheep’s most successful ever seasonal ale, which was brewed to celebrate the Tour de France and the sport of cycling, and will be available in pubs from September 25th to the end of November.

Jo Theakston, Sales and Marketing Director of Black Sheep Brewery said: “Autumn is the season of harvesting and of spooky, Halloween fun, and Reaper taps into both of those themes, with its rye red colouring and fantastic taste. We’re keen to hear what pub customers and visitors to our Brewery in Masham think of Reaper.

“It’s a great example of how the creative and talented team at Black Sheep can deliver something new and fresh from our microbrewery.”

Black Sheep Brewery’s Visitor Centre will be celebrating Cask Ale Week with “shepherded” brewery tours, each followed by tutored tastings, as well as prize giveaways. The Bistro and Sheepy Shop, will also be open at the Brewery, in Wellgarth, Masham.

Jo added: “Cask Ale Week is always an exciting time at Black Sheep Brewery. It sees the launch of our autumn seasonal ale and creates a fantastic atmosphere, with guests enjoying an enhanced range of activities at the Visitor Centre. 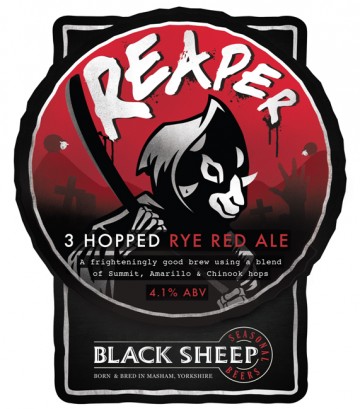