Black Sheep Brewery has welcomed two budding brewers to its flock in a landmark move that sees the company take on apprentices for the first time in its history. The Masham-based brewery, in association with Askham Bryan College, has provided the perfect opportunity for youngsters to get onto the career ladder with chances to progress. Nicholas Norris, 22, who is from Thirn, and Joshua Lacey, 19, from Easingwold, have been welcomed to the brewery as part of the scheme, which will see the pair work towards a Food and Drink Qualification (FDQ) Level 2 Diploma for Proficiency in Brewing Industry Skills. The scheme will take place over an 18-month period with Black Sheep offering continued development opportunities throughout. Alan Dunn, head brewer at Black Sheep Brewery, said: “This opportunity will provide the ideal opportunity for young people to progress up the career ladder, and I am delighted to welcome both Nicholas and Joshua to the brewery. By giving them both hands-on experience together with an education, this will help with their progression, allowing them the opportunity to get engaged with the business and help take it further forward in the future.” Both apprentices will be provided with 37 hours working experience per week, which includes seven hours of training. Rob Theakston, managing director at Black Sheep Brewery, said: “It is a significant landmark for Black Sheep Brewery, and is something that we are really excited about and committed to. Our apprenticeship scheme will provide Nicholas and Joshua with real opportunities to grow within the business as we nurture them throughout their courses, and I would like to welcome them both to their roles.” www.blacksheepbrewery.com ENDS NEWS RELEASE: ISSUED ON BEHALF OF THE BLACK SHEEP BREWERY CONTACT: Paul White on 01325 363436 Notes to Editors: The Black Sheep Brewery in Masham made its first beer in 1992 after being built up by Paul Theakston, whose family had brewed in the area for six generations. In a world of ever increasing bland, mass-produced beer Paul saw an opportunity to return to what his family had done best since 1827, making real beer in the time-honoured fashion. An old maltings building, once part of Lightfoot's Brewery became the Brewery’s home. This landmark building, which stands high over the banks of the Ure, had fallen in to disrepair as years of neglect as a semi-redundant grainstore had taken its toll. Paul assembled a small team around him to fight the rats and build a traditional country brewery. The Black Sheep Brewery name derived from Masham’s association with sheep, but ‘Sheep Brewery’ didn’t quite sound right, so with a little creativity from Paul’s wife the Black Sheep Brewery was born, a name that sat well with the area, spoke volumes about the maverick attitude to the multi-nationals seeking to dominate the brewing industry and captured the essence of the family struggle that led to our birth. Black Sheep Ale at 4.4% ABV, now in an eco-friendly lightweight bottle, continues to maintain its presence among the top ten premium bottled ale brands, and is available nationwide from virtually all the major supermarket retailers. It is a classic premium bitter and as with all Black Sheep beers, full of character derived from the best possible brewing materials, plenty of time and patience in the brewing and our very special Yorkshire Square fermenters. 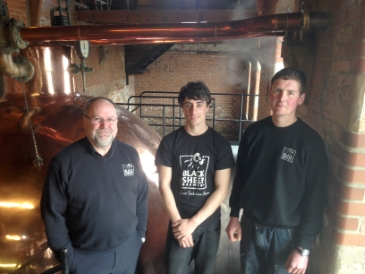