Black Sheep Brewery is aiming to bring the taste buds of beer fans back to life with a new seasonal offering, Resurrection.

Available to pubs from February to Easter, Resurrection is the latest seasonal beer to be launched by Black Sheep since the brewery first invested in its new microbrewery plant in 2013, allowing it to experiment with new and exciting beer recipes.

Black Sheep’s team, based in Masham, North Yorkshire, has used a blend of

Jo Theakston, Black Sheep Brewery’s Sales and Marketing Director, said: “The microbrewery has given our brewers the chance to try new recipes and when brewer Dan Scott-Paul came up with Resurrection, it had to feature in this year’s seasonal ale calendar. It’s a cracking beer, really fresh and different and perfect for the lead up to Easter.”

“Beers such as Resurrection complement our permanent range of beers really well because each seasonal beer allows us to keep challenging the taste buds of Black Sheep fans.”

Resurrection follows the success of recent seasonal ales from Black Sheep, most notably Velo, which proved so popular it is now part of the bottled collection and is making a return to pubs in cask form later this year in May and June. 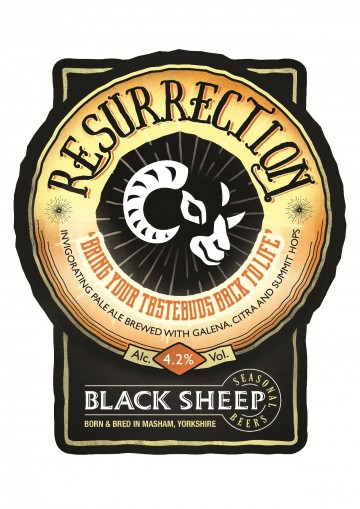