Black Sheep as it's meant to be served

NEWS RELEASE: ISSUED ON BEHALF OF THE BLACK SHEEP BREWERY The Black Sheep Brewery is offering the chance for beer lovers to come along to a beer and food evening hosted by Yorkshire’s first female beer sommelier, Annabel Smith. The event will celebrate the Black Sheep brewery’s 20th anniversary alongside National Cask Ale week, and tickets are on sale now. The evening will comprise of a locally sourced three course meal, accompanied by a selection of carefully chosen Black Sheep cask beers. The evening will take place on 5th October, starting at 7.30 pm. The Black Sheep Brewery is based in Masham and has become one of the most integral tourist attractions in the Yorkshire Dales. Offering a tour, visitor shop and bistro, as well as beers which are sold throughout the UK in major supermarkets and well established pubs and restaurants, the brewery has become a symbol of the Yorkshire Dales. Jo Theakston, Director of Marketing at the Black Sheep Brewery, said: “We want folks to know that wine isn't the only drink that goes well with food and this is event is perfect opportunity to prove our point. Whether you're a well established cask ale fan or just getting into beer, this event is a great opportunity to experience Black Sheep's range of cask beer at their best- accompanying brilliant food from local suppliers. We're really pleased to have Annabel Smith from Cask Marque coming along to celebrate our 20th Anniversary and helping us to highlight the importance quality in serving cask ale.” For more information or to buy tickets please call: 01765 680100 or email sue.dempsey@blacksheep.co.uk ENDS CONTACT: Melanie Smith on 01325 363436 Notes to Editors: Please note the Black Sheep Brewery has a new logo, if high res version is needed please download from: http://www.recognitionpr.co.uk/journalistarea-story.asp?id=11216 The Black Sheep Brewery in Masham made its first beer in 1992 after being built up by Paul Theakston, whose family had brewed in the area for six generations. In a world of ever increasing bland, mass-produced beer Paul saw an opportunity to return to what his family had done best since 1827, making real beer in the time-honoured fashion. An old maltings building, once part of Lightfoot's Brewery became the Brewery’s home. This landmark building, which stands high over the banks of the Ure, had fallen in to disrepair as years of neglect as a semi-redundant grainstore had taken its toll. Paul assembled a small team around him to fight the rats and build a traditional country brewery. The Black Sheep Brewery name derived from Masham’s association with sheep, but ‘Sheep Brewery’ didn’t quite sound right, so with a little creativity from Paul’s wife the Black Sheep Brewery was born, a name that sat well with the area, spoke volumes about the maverick attitude to the multi-nationals seeking to dominate the brewing industry and captured the essence of the family struggle that led to our birth. Twitter: Facebook: 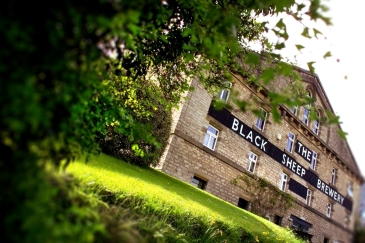