Black Sheep Brewery has been unveiled as the Official Brewery of the 2018 Tour de Yorkshire and is celebrating by launching an exciting prize where the world’s best riders can compete to win their height in beer.

The fourth and final stage of this year’s race on Sunday 6 May passes through Masham - which is the home to the Black Sheep Brewery and newly refurbished Visitor Centre – and Black Sheep is marking the occasion by hosting a ‘Black Sheep Straight’ where fans can gather to watch the action in person.

The Straight will be located on Thorpe Road, Masham, and the first rider to pass that point will be rewarded with their height in crates of Black Sheep Ale, Yorkshire’s best-selling beer.

Black Sheep is also offering one lucky fan the opportunity to take part in the celebratory Maserati Tour de Yorkshire Ride ahead of the final stage of the Tour de Yorkshire (6 May). It will host a photo social media competition where one entrant will be chosen at random to take part in the ride, which is held on the same roads as the professional race.

Welcome to Yorkshire Chief Executive Sir Gary Verity said: “Black Sheep is an iconic Yorkshire brand and we are delighted to be working in partnership with them at the Tour de Yorkshire.

“I’m sure this prize will be of great interest to the riders and we can expect to see some hotly contested racing in Masham.”

Black Sheep Sales and Marketing Director Jo Theakston said: “The Tour de Yorkshire has grown to become one of the UK’s premier sporting events, and we are delighted to support the race as its official brewery. Cycling has really come on in Yorkshire since the Grand Depart in 2014, and we’re looking forward to being part of another momentous occasion in the region.

“There will be plenty of hype in Masham as cycling’s biggest names pass through the town, with one lucky rider set to enjoy a true taste of Yorkshire as they pass through the Black Sheep Straight!”

Further details about the Black Sheep social media competition can be found at: www.facebook.com/BlackSheepBrewery

The fourth edition of the Tour de Yorkshire promises to be the biggest and best one yet with the men’s race being expanded from three to four stages and the Asda Tour de Yorkshire Women’s Race doubling in size from one day to two.

Mark Cavendish is set to head a star-studded field during 3-6 May, with the full list of teams being announced at Welcome to Yorkshire’s Y18 event at Bradford’s Alhambra Theatre on Wednesday 21 March.

Full details on the route can be found at http://letouryorkshire.com

There are plenty of other ways you can get involved with this year’s Tour de Yorkshire. Roadshows are currently being held across the county which provide information on how to make the most of the race. Dates are being added all the time and details on how to register can be found at http://letouryorkshire.com/information/roadshows

Welcome to Yorkshire is also on the hunt for volunteer Tour Makers. These are a passionate and reliable team who will provide a warm welcome to the millions of fans who descend on the county during the four days of action. Being a Tour Maker offers a fantastic opportunity to be part of the race and more information on how to become one can be found at http://letouryorkshire.com/tour-makers

Feeling fit? Then why not tackle parts of the 2018 route for yourself by taking part in the Maserati Tour de Yorkshire Ride. The three routes on offer are suitable for all abilities and culminate on the same finish line as the pros. Find out more at https://letouryorkshire.com/maserati-tour-de-yorkshire-ride

And last but not least, the Tour de Yorkshire Land Art Competition has also been launched. Full details on how to enter that can be found at http://letouryorkshire.com/landart

organised by Welcome to Yorkshire and the Amaury Sport Organisation. 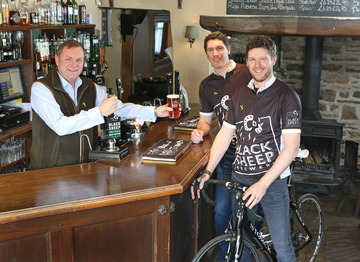 Sir Gary Verity, Chief Executive of Welcome to Yorkshire with Jo and Rob Theakston of the Black Sheep Brewery, celebrating a new partnership for the Tour de Yorkshire (at the White Swan pub in Middleham)
Download Large Image