Black Sheep Brewery has extended its door-to-door beer delivery service in North Yorkshire during the Covid-19 crisis to meet high demand from customers.

The beer delivery service, which was initially available within a three-mile radius of the Masham based brewery has now been extended to a 15-mile radius due to popular demand.

A selection of bottled and canned beers are available for customers to safely purchase whilst they are staying at home or unable to access the limited availability at supermarkets.

A selection of gin, including the Black Sheep Yorkshire Dry Gin, an artisan Yorkshire take on the classic London dry gin, along with cider and soft drinks, are also available.

Orders and payments are being taken over the phone for the delivery service and for customers who are able to collect, the drive through service at the Visitor Centre is also available, where beer is brought out to vehicles whilst maintaining a safe social distance.

The brewery is also continuing to offer food deliveries to Masham and surrounding villages and has extended its original delivery menu to also include homemade pizzas, curries and kebabs prepared by its chefs at its Visitor Centre.

The Black Sheep team will be following responsible social distancing and hygiene measures during all deliveries.

Charlene Lyons, Chief Executive of Black Sheep Brewery, said: “The response we have had from the local community has been amazing and has encouraged us to extend the range of our delivery service so more people across North Yorkshire can enjoy some Black Sheep beer while they follow the guidance to stay at home.

“We are very proud of our excellent team who are working hard to take and prepare a lot of orders as well as deliver them safely to customers doorsteps. Our food service has also gone down a storm with local people and it’s great to be able to offer them a treat in these testing times.” 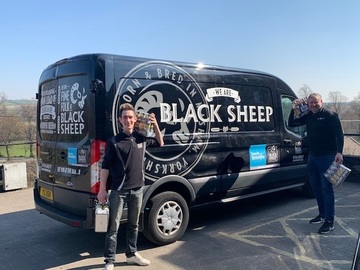