Paul Theakston, the iconic founder of Black Sheep Brewery, is leaving his mark on the brewery’s 25th anniversary celebrations as Black Sheep Special Ale returns to the region’s pubs with a limited edition pump clip.

Paul, who founded the brewery in 1992, will hand sign each commemorative pump clip for Special Ale, which was the brewery’s second ever beer, following on from Black Sheep Best Bitter.

It has remained one of the brewery’s strong cask brands as a full flavoured, premium cask ale.

At 4.4% ABV, Black Sheep Special Ale is brewed with Challenger and Progress hops, with Maris Otter malted barley and Crystal Malt, to deliver a consistently rich flavour and darker colour.

Black Sheep Special Ale has grown to become one of the

The launch marks the second time in Black Sheep’s 25th anniversary year that Paul Theakston has featured in the brewery’s celebrations, as he was immortalised in the form of a figurine tap handle when Pathmaker, a brew named in his honour, was made available to pubs and bars in March.

Jo Theakston, Sales and Marketing Director at Black Sheep Brewery, said: “Black Sheep Special Ale has grown to become one of our flagship brews and has remained popular since Dad created it. Over the course of the year we’ve been looking at ways to give back to our loyal customers and pub trade partners, and Special Ale has proven to be a well-received beer that deserved a special personal touch in honour of our 25 years.

“Together with the Pathmaker figurines, the limited edition pump clips will make for a real collector’s item and a good talking point at the bar.”

Paul Theakston added: “Offering a personal touch has always remained at the heart of our ambitions since Black Sheep was established, and this is another initiative to say thank you to each and every person that has contributed to what we have achieved over the last 25 years.” 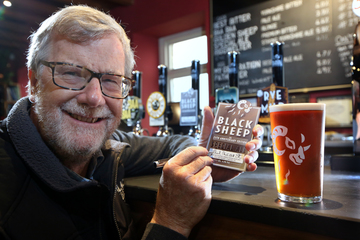