The legacy of the Tour de France’s Grand Depart 2014 will continue in Yorkshire for many years, say bosses at Black Sheep Brewery.

Jo Theakston, Sales and Marketing Director at the Masham-based Brewery, said: “Le Grand Depart 2014 has been widely hailed as the greatest of all time, which comes as no surprise to anybody who knows the passion Yorkshire people put into showcasing the region. Everyone from Gary Verity at Welcome to Yorkshire, through to small business owners who embraced the event and the millions who lined the streets, ought to be rightly proud of what has been achieved.

“I have no doubt that the economic and social impact will continue to benefit Yorkshire for many years. For the Black Sheep Brewery, we welcomed record numbers of people to our Visitor Centre in Masham over that weekend and our special celebratory beer, Velo, sold more than double the volume of any previous seasonal ale we had produced. That success prompted us to add Velo to our permanent bottled range, and its popularity continues.

“We will continue to support events such as the Tour de Yorkshire in 2015 and beyond and such events will ensure the legacy of Le Grand Depart lives on. At Black Sheep Brewery, we will be reviving the hugely popular Velo cask ale in May and June to celebrate this fantastic event.” 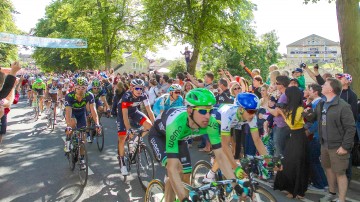