Black Sheep Brewery is supporting its local community during the Coronavirus emergency in North Yorkshire by offering home deliveries of cooked food and beer.

A menu of freshly cooked food, prepared by its chefs at the brewery in Masham, along with a selection of cask, canned and bottled beers are available to order for people living in the town and surrounding villages.

Offering, a selection of starters, main course and desserts from its Visitor’s Centre menu, Black Sheep’s delivery team will be traveling around the local area dropping off pre-ordered meals to local customers.

Orders and payments are being taken over the phone and Black Sheep’s team will be following responsible social distancing and hygiene measures during deliveries.

Black Sheep is also offering deliveries of bottled and canned beers in addition to a four-pint carry keg, which will offer customers a chance to enjoy fresh cask beer in the comfort of their own home. The carry kegs can be returned and refilled directly from the brewery taps at a discounted price until further notice.

For those people that are not self-isolating the brewery is also offering a take-away service.

The brewery is taking orders at any time of the day with lunch being delivered between 12 and 3pm Monday to Sunday and Dinner orders between 5pm and 8pm Tuesday to Saturday.

Charlene Lyons, Chief Executive of Black Sheep Brewery, said: “This is a tough time for everyone and social isolation, particularly for those in rural areas, is particularly hard. We want to do what we can to help our community stay in contact and have the opportunity to enjoy some good beer and food, especially if they are unable to get to the shops regularly.”

“For those working from home or self-isolating, raise a glass of beer to the famous Yorkshire resolve we’re all showing at the moment and we look forward to welcoming visitors back to the brewery when this is all over.” 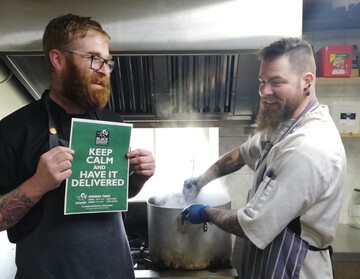