The 42 percent abv premium strength gin, which is single shot distilled in a copper alembic still over an open flame and bottled by hand in Masham, contains a blend of 14 carefully selected botanicals.

With a strong focus on citrus flavours, Black Sheep Yorkshire Dry Gin features a plethora of fruits botanicals including lemon, orange, apricot, elderberry and pomelo peel along with a touch of spice from pink peppercorns and in a nod to their brewing heritage, it’s finished with malted barley and lemondrop hops.

The launch of Black Sheep Dry Yorkshire Gin marks the brewery’s most significant broadening of its drinks range since it successfully introduced its first premium lager, 54 Degrees North, in 2017.

Alongside its lager and Black Sheep’s established and popular range of beers, it is planned that the Yorkshire dry gin will be the first of a collection of spirits produced by the brewery.

Jo Theakston, Sales and Marketing Director of Black Sheep Brewery, said: “The demand for authentic, premium drinks continues to grow and entering the spirits market is a natural progression for Black Sheep as our range of beers and lager have established a reputation for quality and authenticity – all things that are expected by the new generation of gin drinkers.

“The gin market is continuing to grow, and we strongly believe there is a place for Black Sheep spirits as consumers are looking for authentic, high quality, well-crafted products, which has been the cornerstone of our approach since we started brewing in 1992.”

Black Sheep Yorkshire Dry Gin will be available from the brewery shop and online from the end of September. 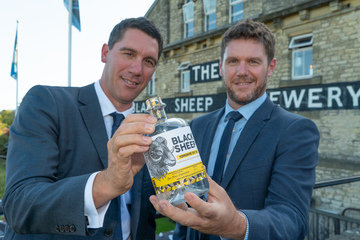