The service is available to communities of North Yorkshire and the North East including locations such as Darlington, Harrogate, Ripon, York, Richmond, Northallerton, Bedale and the lower dales.

In addition, the team will also be making direct deliveries in Leeds.

A selection of Black Sheep’s bottled, canned and mini-kegged beers along with its recently launched gin is available for customers to safely purchase while following the restrictions by remaining at home if possible.

The Black Sheep team, who will be delivering the beer to these communities, will follow responsible social distancing and hygiene measures throughout.

Meanwhile, the family-run brewery continues to enjoy a national surge in sales - from Edinburgh to Cornwall - via its online shop. Recent new additions include eight pint mini kegs which allow you to enjoy draught beer from the comfort of your own home.

With Christmas approaching, sales of its range of hampers and gift boxes are also increasing including its ever-popular beer advent calendars, containing 24 beers for the 24 days in the run up to Christmas Day.

In line with the government’s announcement, the Black Sheep Visitor Centre in Masham will be closed until restrictions are lifted. It has also suspended its food delivery service DeliverEwe.

Charlene Lyons, Chief Executive of Black Sheep Brewery, said: “During the spring lockdown, our customers really appreciated our door to door deliveries. Following the introduction of the second lockdown we decided to resume this ‘Brew to Ewe’ service, so more people can continue to enjoy our award-winning Black Sheep beers, whilst remaining safe.

“Our team is working incredibly hard to provide folk with a proper taste of Yorkshire and we look forward to welcoming everyone back once these current restrictions are lifted.

To arrange a ‘Brew to Ewe’ delivery, email telesales@blacksheep.co.uk

Photo caption: Black Sheep Brewery Drayman Chris Croft who is among the team delivering beer across the region to people’s homes 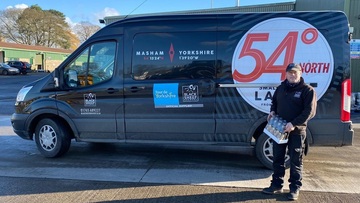 Black Sheep Brewery Drayman Chris Croft who is among the team delivering beer across the region to people’s homes
Download Large Image
Latest Tweets from @Recognition1st :