Black Sheep Brewery is experiencing the biggest period of sales ever from its online shop as customers across the country turn to the internet for their beer orders during the coronavirus emergency.

The Masham-based brewery has seen an influx of nationwide orders, as drinkers adhere to the ‘stay at home’ advice from the government and explore new ways of buying beer. Black Sheep has experienced an increase of more than 1500 percent in online sales since pubs closed on 20th March, compared to the same period last year.

Working closely with its distribution partners, Black Sheep is ensuring strict social distancing and health guidelines are followed for each delivery as well as for its team preparing orders at the brewery.

In the past month the brewery has been receiving orders from Edinburgh to Cornwall for its range of bottled and canned beers, as well as its Black Sheep Yorkshire Dry Gin.

The most popular beers with its online customers, currently, are its classic Black Sheep Ale, Golden Sheep Ale and Riggwelter along with its Monty Python collaborative brew, Holy Grail.

Black Sheep is also seeing a surge in hamper orders, as people send memorable gifts to loved ones from a distance whilst the government continue to advise the general public to stay at home.

Charlene Lyons, Chief Executive of Black Sheep Brewery, said: “With the country staying at home as much as possible we’re seeing levels of online orders that we’ve never seen before, not even during the festive season which is typically the busiest time of year for our online shop. Our team has worked incredibly hard to ensure we can meet these orders working to the strict health guidance and social distancing rules.

“We’re really pleased to offer a taste of Yorkshire to people across the country in this difficult time and we want to thank our loyal customers for supporting our business.”

The brewery is continuing to offer local drink and food deliveries, within a 15-mile radius of its Visitor Centre at Masham and more details can be found on its website and social media. 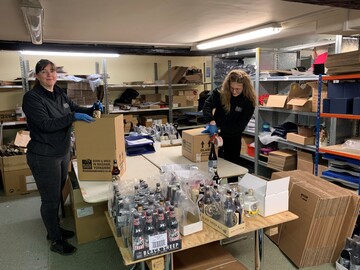