Black Sheep Brewery has included products from Wensleydale Creamery to ensure people are still able to enjoy a taste of Yorkshire this Christmas.

The Masham-based brewer has produced numerous hampers for this Christmas, some of which include two of the independent firm’s best-selling cheeses alongside its award-winning ales featured in its festive range of hampers and gift boxes.

It is designed to support a fellow local business by promoting its Yorkshire Wensleydale Cheese and Fountains Gold Cheddar to a wider and alternative customer base.

Black Sheep Brewery has already experienced a 1,500 percent increase in its online sales so far this year and the business expects a further boom during England’s second lockdown.

In addition to featuring the artisan cheeses from Wensleydale Creamery, which is situated 26 miles away in Hawes, the gift range also includes pickles, cheese biscuits and fruit cake sourced from other local producers, alongside the breweries incredible range of award-winning beers.

Those searching for online inspiration for Christmas gifts will see both artisan cheeses included in Black Sheep’s Finest Hamper and Black Sheep Ale Cheeseboard, while 200g truckle of Yorkshire Wensleydale Cheese is the centrepiece of the Riggwelter Cheeseboard.

In addition, Yorkshire Wensleydale Cheese can also be selected, together with Fountains Gold Cheddar with Black Sheep Riggwelter Ale, as part of Black Sheep’s Create Your Own Gift Box.

Charlene Lyons, chief executive of Black Sheep Brewery, said: “Many more people will be going online for inspiration this year when it comes to finding that perfect Christmas gift and we are pleased to be showcasing some of the very best Yorkshire has to offer.

“We wanted to promote and support a fellow local business in these challenging times and there’s no better way than to pair Wensleydale Creamery’s delicious cheeses with our own award-winning beers – which make for a fantastic combination!”

Sandra Bell, of Wensleydale Creamery, said: “We are delighted to be working with Black Sheep Brewery to supply our handcrafted cheese for their Christmas hampers and gift boxes. It’s a great idea, and one that proudly champions two local independent businesses

“If you’re looking for that perfect gift or just want to guarantee you can enjoy a taste of Yorkshire come Christmas Day, then this is the perfect choice.”

Richard Flinton, chief executive of North Yorkshire County Council, said “The run-up to Christmas is a crucial time for businesses and this is an excellent example of mutual support from two famous North Yorkshire brands.

“We’ll all be thinking about our Christmas shopping and as businesses deal with the impact of the national restrictions I urge everybody to think and buy local – think of North Yorkshire businesses first. Many of our businesses have great online and delivery or click and collect offers, and we have nearly 800 businesses that can be accessed through our own Buy Local initiative, www.northyorks.gov.uk/buy-local.” 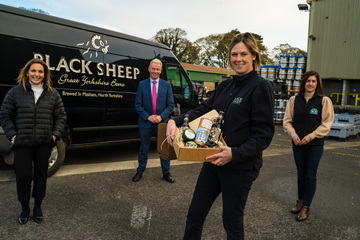