Black Sheep Brewery is ending 2020 with the launch of a limited-edition brew that has been two and half years in the making.

The special edition version of their iconic 8.7% ABV Imperial Russian Stout has been ageing since the summer of 2017 in a mixture of Bourbon and Whisky barrels at Black Sheep’s brewery with only 750 bottles produced.

Alongside its dark fruit flavours and rich sweet notes, which made it very popular with Black Sheep’s broad range of fans, the ageing process has imparted flavours of oak, sherry, smoky bourbon and rolled vanilla.

Exclusively available online from Black Sheep Brewery, the stout comes in wax-sealed 750ml bottles. Orders are being taken for deliveries before Christmas up to and including 18th December.

Every year the brewery creates a collection of seasonal beers that are available in pubs, predominately across the Yorkshire and the North East.

However, as a result of lockdowns and tier systems, which have forced pubs to close, Black Sheep quickly adapted to create a range of special beers that could be bought direct by the public through its online shop.

The ‘enjoy at home’ seasonal beers have proven popular with customers across the country and contributed to Black Sheep Brewery experiencing a massive increase in online orders by more than 500% in 2020.

Charlene Lyons, Chief Executive of Black Sheep Brewery, said: “Our Imperial Russian Stout has built quite a following from beers fans for more than five years, but this version is something even more special that drinkers will be keen to get their hands on! This once-in-a-decade limited edition brew has sat quietly in a corner of the brewery since the middle of 2018, slowly gaining a unique a blend of unique flavours just in time for Christmas.

“Our seasonal beers are always eagerly anticipated and a celebration of the brewing talents of the Black Sheep team, but like pretty much everything else this year we have had to approach them a little differently. While we’d want our customers to experience them in their favourite pub, we’ve made it possible for them to enjoy them in the comfort of their own home. The growth in our online orders shows our seasonal beers continue to be a hit with customers and we thank them for their support.” 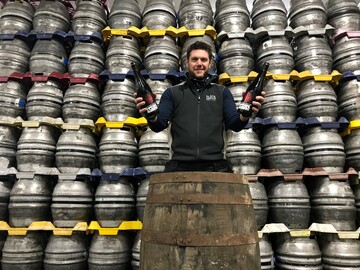