NEWS RELEASE: ISSUED ON BEHALF OF THE BLACK SHEEP BREWERY Black Sheep Brewery has launched Black Sheep Ale in a can for the first time, which will be sold nationwide in Tesco. The distinct flavour of Black Sheep Ale has been captured in an alternative ring-pull can which will be available in a handy four-pack. This is the first product from the brewery, based in Masham, which supermarket customers can enjoy in an alternative way to the traditional glass bottle and was developed with Tesco. Black Sheep Ale was part of the original line-up of beers brewed alongside cask Best Bitter when the brewery opened in 1992. Nearly 20 years later the iconic brew is available on cask, bottled and now in a can. A powerfully flavoured pint, Black Sheep Ale is 4.4 %ABV and packs a punch with rich fruit aromas alongside a distinctively smooth, bittersweet taste. Plenty of choice Golding hops are used, which give it a roast coffee maltiness followed by Black Sheep’s characteristic refreshingly dry and bitter finish. Jo Theakston, Director of Marketing and Off Trade Sales at Black Sheep Brewery said: “We are constantly looking at ways to build on our range of excellent beers. Black Sheep Ale is one of our most iconic beers, and in the top 10 bottled beers nationwide, so it seemed very fitting for it to be our first ever product available in a can to build on its initial success. We have kept the same quality approach and paid particular attention to making sure the taste of the can product is just as good as the bottle. “Black Sheep Ale will still be available in bottle form and through trade on cask. Having a Black Sheep Ale four pack of cans opens our beers to a new market of beer drinkers and a whole new range of occasions, particularly those where glass is not an option. We hope to add some genuine quality to the canned ale category." ENDS CONTACT: Melanie Smith on 01325 363436 Notes to Editors: The Black Sheep Brewery in Masham made its first beer in 1992 after being built up by Paul Theakston, whose family had brewed in the area for six generations. In a world of ever increasing bland, mass-produced beer Paul saw an opportunity to return to what his family had done best since 1827, making real beer in the time-honoured fashion. An old maltings building, once part of Lightfoot's Brewery became the Brewery’s home. This landmark building, which stands high over the banks of the Ure, had fallen in to disrepair as years of neglect as a semi-redundant grainstore had taken its toll. Paul assembled a small team around him to fight the rats and build a traditional country brewery. The Black Sheep Brewery name derived from Masham’s association with sheep, but ‘Sheep Brewery’ didn’t quite sound right, so with a little creativity from Paul’s wife the Black Sheep Brewery was born, a name that sat well with the area, spoke volumes about the maverick attitude to the multi-nationals seeking to dominate the brewing industry and captured the essence of the family struggle that led to our birth. Black Sheep Ale at 4.4% ABV, continues to maintain its presence among the top ten premium bottled ale brands, and is available nationwide from virtually all the major supermarket retailers. It is a classic premium bitter and as with all Black Sheep beers, full of character derived from the best possible brewing materials, plenty of time and patience in the brewing and our very special Yorkshire Square fermenters. Twitter: Facebook: Share 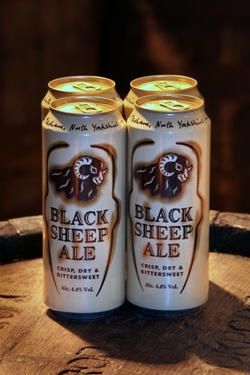