Black Sheep Brewery is delivering the perfect gift to pubs this Christmas with the return of its festive brews, while continuing the revelling at its award-winning visitor centre throughout December and into the New Year.

Black Sheep’s Monty Python-inspired, ‘very naughty’ pale ale, Brian, along with Blitzen will be available in pubs and bars for the remainder of December.

At 3.9% ABV, Brian, a beautifully balanced pale ale, was created in collaboration with Monty Python, in 2016, and named in homage to the comedy troupe’s 1979 film, ‘Monty Python’s Life of Brian’.

Blitzen, a 4.0% ABV ruby ale, is also making a return, as the pair complete the Masham-based brewery’s seasonal ale calendar for 2017 – its silver anniversary year.

Brian and Blitzen will be available in 500ml bottles at Black Sheep’s visitor centre and online at blacksheep.co.uk too, along with ‘Legacy 25’, the brewery’s limited edition, 750ml bottled beer that has been created to recognise Black Sheep’s 25th anniversary.

Full of Yorkshire character, Legacy 25 has been brewed to offer a warm fruity nose, perfect for the December festivities, blended with Pale and Crystal malts combined with Goldings hops, which produce a beer full of depth, flavour and bite.

The launch of Legacy 25 forms part of Black Sheep’s silver anniversary celebrations, which have included the creation of 54 Degrees North, the brewery’s first lager, in July, as well as several industry awards wins for the company.

The Black Sheep Brewery Visitor Centre, which is in Masham, North Yorkshire, at the site of the brewery, will be open throughout the festive period, with the exception of Christmas Day and Boxing Day.

Jo Theakston, Sales and Marketing Director at Black Sheep Brewery, said: “It’s been an unforgettable year for Black Sheep with our anniversary and many celebrations, so it was only right to spread plenty of Christmas cheer! Rudolph will be taking a backseat this December as Blitzen gets the limelight at the bar, with a bit of mischief and naughtiness from Brian to get people right in the Christmas spirit.

“As always, our popular visitor centre has received a festive facelift, with plenty of tinsel, events and offers available, and even an early sighting of the big man in red himself! Whether it’s a last minute gift or a treat, our online shop and ‘Sheepy Shop’ at the visitor centre have plenty to offer, as well as a host of festive feasts and meals.”

Jo added: “We only have a limited run of Legacy 25, so be sure to get it while it’s available, so you can raise a glass to our first quarter century of brewing!”

In the past 12 months Black Sheep has become a multi-award winning brewery where it has secured the following accolades: 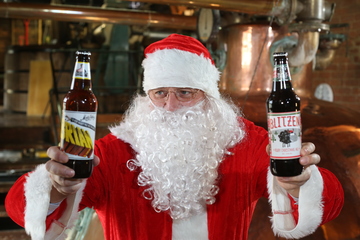