NEWS RELEASE: ISSUED ON BEHALF OF THE BLACK SHEEP BREWERY The Black Sheep Brewery in Masham is bringing celebrated films to its rural surroundings as part of the Bradford International Film Festival (BIFF). The Brewery will be transformed into a cinema with a 10ft screen for Friday 27th and Saturday 28th April, showing three films across the weekend. The nearest cinema to the Masham-based brewery is Richmond, which is approximately 15 miles away, so the event is a real boost for local residents, offering them the chance to see some fantastic films on their doorstep. Visitors can enjoy award-winning beers and a special ‘Hog and Hop’ hot dog whilst watching Oscar nominated, The Help, the epic, Tinker, Tailor, Soldier, Spy and an afternoon showing of family favourite, Hugo. The Black Sheep Brewery’s Black Sheep Ale has also been appointed as the official beer for the Festival. The annual Bradford International Film Festival in partnership with Virgin Media is celebrating its 18th year and remains one of the most anticipated events in the UK film calendar. Hosted by the National Media Museum in Bradford, BIFF has presented hundreds of new and classic films over the years, including exclusive premieres, and attracts an array of special guests. Jo Theakston, Director of Marketing at The Black Sheep Brewery said, “This is the first time we have held a Beer and Film weekend at the Brewery, 2012 is our 20th Anniversary so it’s great opportunity to celebrate by hosting such a unique event. We’re really proud to be a part of the Festival which is the pioneering film event for Yorkshire. We pride ourselves on brewing quality, traditional Yorkshire beers and it’s great to be teaming up with such a well established event also synonymous with this part of the country. “Our special event will showcase three fantastic films in the brewery’s restaurant area, a unique experience in itself. Being able to bring the cinema experience to such a rural location is a real coup for us. Visitors will be able to enjoy a pint of Black Sheep and a special ‘hog hop’ hot dog, which will make the experience even more special.” Rob Shaw, Head of Development at the National Media Museum, said: “We are very pleased that Black Sheep will be our official beer for the Festival. We were keen to team up with a true Yorkshire beer and Black Sheep Brewery incorporates everything that is traditionally Yorkshire, from where it’s made to the brewing methods used. “We are really pleased that the brewery has decided to screen some films in its visitors centre. It’s an unusual place to screen a film and will really capture the essence of the Festival.” For more information and tickets please see www.blacksheepbrewery.com or contact Sue Dempsey sue.dempsey@blacksheep.co.uk or 01765 680100 ENDS CONTACT: Melanie Smith on 01325 363436 Notes to Editors: Please note the Black Sheep Brewery has a new logo, if high res version is needed please download from: http://www.recognitionpr.co.uk/journalistarea-story.asp?id=11216 The Black Sheep Brewery in Masham made its first beer in 1992 after being built up by Paul Theakston, whose family had brewed in the area for six generations. In a world of ever increasing bland, mass-produced beer Paul saw an opportunity to return to what his family had done best since 1827, making real beer in the time-honoured fashion. An old maltings building, once part of Lightfoot's Brewery became the Brewery’s home. This landmark building, which stands high over the banks of the Ure, had fallen in to disrepair as years of neglect as a semi-redundant grainstore had taken its toll. Paul assembled a small team around him to fight the rats and build a traditional country brewery. The Black Sheep Brewery name derived from Masham’s association with sheep, but ‘Sheep Brewery’ didn’t quite sound right, so with a little creativity from Paul’s wife the Black Sheep Brewery was born, a name that sat well with the area, spoke volumes about the maverick attitude to the multi-nationals seeking to dominate the brewing industry and captured the essence of the family struggle that led to our birth. Black Sheep Ale at 4.4% ABV, now in an eco-friendly lightweight bottle, continues to maintain its presence among the top ten premium bottled ale brands, and is available nationwide from virtually all the major supermarket retailers. It is a classic premium bitter and as with all Black Sheep beers, full of character derived from the best possible brewing materials, plenty of time and patience in the brewing and our very special Yorkshire Square fermenters. Twitter: Facebook: Share 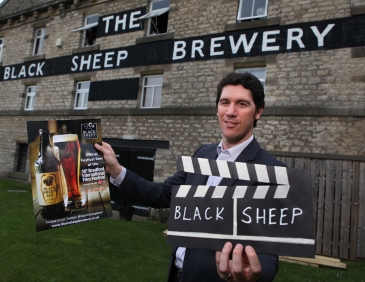