NEWS RELEASE: ISSUED ON BEHALF OF THE BLACK SHEEP BREWERY The Black Sheep Brewery has raised more than £700 for Swaledale Mountain Rescue Team from its annual Boots and Beer Walking Festival. Wensleydale was host to the 340 walkers who took part, exploring the beautiful Yorkshire countryside and discovering breath-taking scenery plus a few pub stops along the way. Walkers were able to choose from a selection of 14 walks ranging from easy to challenging, specially written by Mark Reid, author of 'The Inn Way' guidebooks. There was also a great line up of entertainment for Saturday night, including a three-course beer and food night at the Wenslydale Creamery, hosted by one of the Black Sheep’s brewers and a quiz night at the Wensleydale Pantry in Hawes. Sponsors who helped to make Boots and Beer happen were Welcome to Yorkshire, The Wensleydale Creamery, Harrogate Spring Water, Country Walking and Cotswold Outdoors. Money raised from raffle ticket sales at the evening events have been given to the Swaledale Mountain Rescue Team, which provides a mountain and cave rescue service within the Swaledale and Wensleydale areas of North Yorkshire. Jo Theakston, Director of Marketing and Off Trade Sales at Black Sheep Brewery said: “The turn-out for Boots and Beer was fantastic, it was a great weekend for everybody who attended. The weather was beautiful which made the event even better. “The wide range of walks available at the festival meant that there was something for everyone, from beginners to experienced walkers. Each walk showcased some of the most beautiful parts of the Yorkshire Dales, which we are proud to say is home to the Black Sheep Brewery. “We have raised a fantastic amount for the Swaledale Mountain Rescue Team, which works tirelessly to keep the Yorkshire Dales safe for walkers. It was good to see so many walkers attend the weekend in our anniversary year and enjoying a pint of Black Sheep.” ENDS CONTACT: Melanie Smith on 01325 363436 Notes to Editors: Please note the Black Sheep Brewery has a new logo, if high res version is needed please download from: http://www.recognitionpr.co.uk/journalistarea-story.asp?id=11216 The Black Sheep Brewery in Masham made its first beer in 1992 after being built up by Paul Theakston, whose family had brewed in the area for six generations. In a world of ever increasing bland, mass-produced beer Paul saw an opportunity to return to what his family had done best since 1827, making real beer in the time-honoured fashion. An old maltings building, once part of Lightfoot's Brewery became the Brewery’s home. This landmark building, which stands high over the banks of the Ure, had fallen in to disrepair as years of neglect as a semi-redundant grainstore had taken its toll. Paul assembled a small team around him to fight the rats and build a traditional country brewery. The Black Sheep Brewery name derived from Masham’s association with sheep, but ‘Sheep Brewery’ didn’t quite sound right, so with a little creativity from Paul’s wife the Black Sheep Brewery was born, a name that sat well with the area, spoke volumes about the maverick attitude to the multi-nationals seeking to dominate the brewing industry and captured the essence of the family struggle that led to our birth. Black Sheep Ale at 4.4% ABV, now in an eco-friendly lightweight bottle, continues to maintain its presence among the top ten premium bottled ale brands, and is available nationwide from virtually all the major supermarket retailers. It is a classic premium bitter and as with all Black Sheep beers, full of character derived from the best possible brewing materials, plenty of time and patience in the brewing and our very special Yorkshire Square fermenters. Twitter: Facebook: 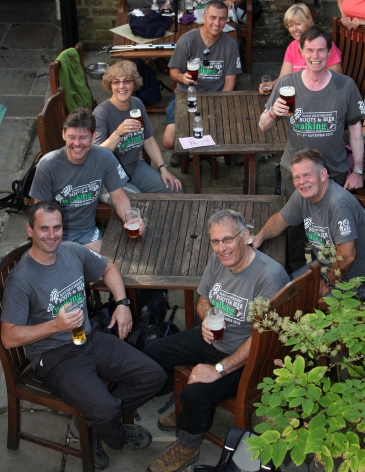