NEWS RELEASE: ISSUED ON BEHALF OF THE BLACK SHEEP BREWERY In its 20th Anniversary year The Black Sheep Brewery has cemented its iconic name among the top cask ales in the UK, selling 20 million pints worldwide, with its Black Sheep Ale appearing in the top ten highest selling bottled ales. The family-run brewery has grown from strength to strength with its founder Paul Theakston steering the business forward to achieve its success. Its bottled beers can be found in all major supermarkets including Sainsbury’s, Tesco and Asda, while its cask ale dominates most Yorkshire based leisure facilities throughout pubs, restaurants and hotels and further afield in thousands of outlets across the UK. Several recent changes have meant that heading into its anniversary year, the next generation of the family has come to the fore. Rob Theakston, son of founder, Paul, has stepped into the role of Managing Director, while Paul continues an influential role at the brewery as Chairman. Keeping it in the family, Rob’s younger brother, Jo Theakston, is Director of Marketing at the brewery and oversees the brewery’s fairly recent move into seasonal beers. Its most recent offering is ‘Progress’, brewed for the Brewery’s 20th Anniversary. The beer also fits perfectly with Black Sheep’s autumn/ winter seasonal range, with its rich, single hopped consistency, brewed with only full flowered English Progress hops. The Brewery has remained one of the most successful tourist attractions in the Yorkshire Dales since the visitors centre opened in the same year as the brewery. The centre and restaurant/bistro were always part of the initial plans when Paul took over an old malting’s building, which still houses the brewery today. The brewery sees almost 100,000 visitors to its site each year, making it one of the Yorkshire Dales most popular tourist destinations. In addition to its visitor’s centre and guided tours, the Brewery also organises an annual Boots and Beer Walking Festival, which saw more than 350 people attend this year, plus charity raising events including the Firkin Challenge, incorporating a sponsored cycling event with a well-earned pint of Black Sheep at the end. Rob Theakston said: “We are extremely proud of our heritage and the history of the Brewery from its inception in 1992. My dad, Paul, is part of six generations of brewing in Masham and my brother and I are dedicated to continuing this success. “We use traditional methods to brew our beers, which is something we are very proud of. My dad rescued old brewing equipment from declining and closing breweries including Yorkshire Square fermenters, which we still use today making our beers truly Yorkshire. We always try to source our ingredients as locally as possible and Black Sheep is the biggest user of Maris Otter barley and malt in Britain and we use full flower varieties of English Hops in flower form. “Going forward as a business, we will continue to produce quality beers in a time-honoured traditional fashion, offering customers our signature brews coupled with a variety of limited edition and seasonal beers in order to provide some variation for our drinkers.” ENDS CONTACT: Melanie Smith on 01325 363436 Notes to Editors: Please note the Black Sheep Brewery has a new logo, if high res version is needed please download from: http://www.recognitionpr.co.uk/journalistarea-story.asp?id=11216 The Black Sheep Brewery in Masham made its first beer in 1992 after being built up by Paul Theakston, whose family had brewed in the area for six generations. In a world of ever increasing bland, mass-produced beer Paul saw an opportunity to return to what his family had done best since 1827, making real beer in the time-honoured fashion. An old maltings building, once part of Lightfoot's Brewery became the Brewery’s home. This landmark building, which stands high over the banks of the Ure, had fallen in to disrepair as years of neglect as a semi-redundant grainstore had taken its toll. Paul assembled a small team around him to fight the rats and build a traditional country brewery. The Black Sheep Brewery name derived from Masham’s association with sheep, but ‘Sheep Brewery’ didn’t quite sound right, so with a little creativity from Paul’s wife the Black Sheep Brewery was born, a name that sat well with the area, spoke volumes about the maverick attitude to the multi-nationals seeking to dominate the brewing industry and captured the essence of the family struggle that led to our birth. Black Sheep Ale at 4.4% ABV, now in an eco-friendly lightweight bottle, continues to maintain its presence among the top ten premium bottled ale brands, and is available nationwide from virtually all the major supermarket retailers. It is a classic premium bitter and as with all Black Sheep beers, full of character derived from the best possible brewing materials, plenty of time and patience in the brewing and our very special Yorkshire Square fermenters. Twitter: Facebook: 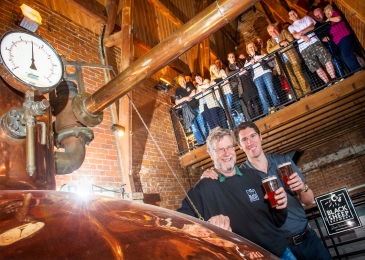