Black Sheep creates "The Flock", an unique offering for supermarkets

Black Sheep Brewery is taking its first steps into the multipack market with the launch of The Flock, a collection of six of its best-loved beers.

The Flock brings together old and new, with 500ml bottles of Black Sheep Ale, Riggwelter, Yorkshire Square and Golden Sheep, alongside the two most recent additions to Black Sheep’s bottled range, All Creatures and Velo.

Velo was launched as a bottled beer in July, following its success as a seasonal cask ale, celebrating the Tour de France’s Grand Depart passing by the Brewery as it started in Yorkshire.

Jo Theakston, Sales and Marketing Director at Black Sheep Brewery said: “It’s hard to pick a favourite from the Black Sheep range, so we have developed The Flock, to give customers of the off-trade an opportunity to enjoy a wide range of beers from our award-winning brewery.

“From Black Sheep Ale, which was launched in 1992 when the Brewery opened, to Velo, which is new for 2014, The Flock is a journey through our brands, with something for every palate.

“For existing fans of Black Sheep, The Flock offers the chance to buy a selection of their favourite beers, and for those looking for their first taste of our products, it is an opportunity to explore the breadth and depth of what our brand has to offer.

“While we have sold limited beer selections direct to customers online and at our Visitor Centre, this is the broadest Black Sheep collection ever and the first offering created especially for multiple grocer retail partners.” 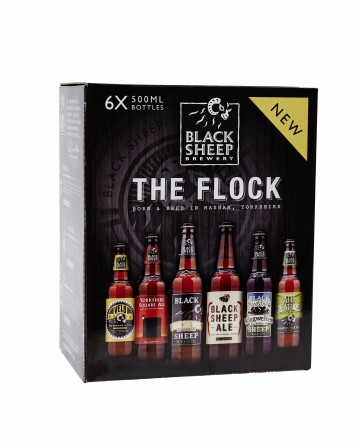