The Black Sheep Brewery plc has expanded its retail estate with the acquisition of popular bar and restaurant Kith & Kin from Arc Inspirations.

In only four months, the Masham-based brewery has increased its retail portfolio to six sites across Yorkshire with the purchase of the Chapel Allerton, Leeds-based establishment.

The existing Kith & Kin workforce will be retained, with all 18 employees transferred to Black Sheep, as part of the deal.

This latest acquisition by Black Sheep builds on the successful purchase of York Brewery and four of its pubs in December 2018.

Andy Slee, Chairman of The Black Sheep Brewery plc, said: “We are delighted with the acquisition of Kith & Kin, which follows the successful purchase of York Brewery late last year. Kith & Kin fits perfectly with our strategy of developing our retail presence in our Yorkshire heartland and is a welcome addition to our growing group of pubs and bars.”

Rob Theakston, Managing Director of The Black Sheep Brewery plc, said: “Kith & Kin is a thriving bar with a solid food trade located in the heart of Yorkshire. Arc Inspirations share our passion for locally sourced produce, which we look forward to building on in the future.

“We are also excited to introduce a wider range of quality cask and craft ales from our award-winning range of brands. Kith & Kin has traded successfully for many years and we are proud and looking forward to welcoming the team into our flock.”

Arc Inspirations is a long-established bar and restaurant operator with several sites across the North of England.

Martin Wolstencroft, Chief Executive of Arc Inspirations, said: “In line with our plan to focus growth on our three core brands – Banyan, The Box and Manahatta – in cities across the North of England, we have taken the strategic decision to sell our Kith & Kin site in Leeds. Our team at this location has been fantastic and we’d like to thank them for their hard work and contribution. Their employment will be preserved as they will move across to Black Sheep Brewery Retail as they take over the site – and we wish them and Black Sheep the very best.” 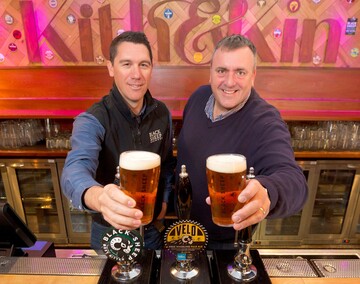