In typically self-deprecating English style, the ruby ale previously known as Blind Side will now be in pubs with the name ‘Ruckin’ Disaster’. Black Sheep has reacted quickly to support rugby fans left disappointed by results from the home nation.

Brewed at the Black Sheep Brewery, in Masham, North Yorkshire, with an all-English pack of eight hops varieties, Ruckin’ Disaster will be available in pubs as a cask ale throughout the remainder of October.

The 4.3% ruby cask ale is the latest in a string of hugely popular brand new beers to be developed in the microbrewery plant, which allows for greater experimentation and creativity from the multi-award-winning Black Sheep brewing team. It is the same ability to move swiftly that has allowed Black Sheep to react to the disastrous English ejection from the tournament.

While fans of other teams enjoy their rugby, supporters and beer lovers of all nationalities can enjoy a great rugby-themed pint, with new pump clips already on their way to pubs.

Rob Theakston, Managing Director at Black Sheep Brewery, said: “It’s come as quite a shock to see England’s exit from the Rugby World Cup – we are used to such disappointment from our football team – but we have acted quickly, and with our tongues firmly in our cheeks, to help pubs and drinkers keep spirits up and take advantage of the popularity of the tournament.

“For the remaining duration of this seasonal ale’s time in pubs, throughout October, Ruckin’ Disaster will allow drinkers to raise a wry smile and a comforting pint.

“We know that as the competition continues without England involved, the pack of eight English hops that we have put together for this great seasonal ale will not let us down. It’s still fantastic to have the Rugby World Cup in England and Wales, and we have some ex-rugby players among our team, so we know that fans will still enjoy having a quality pint to cry into.” 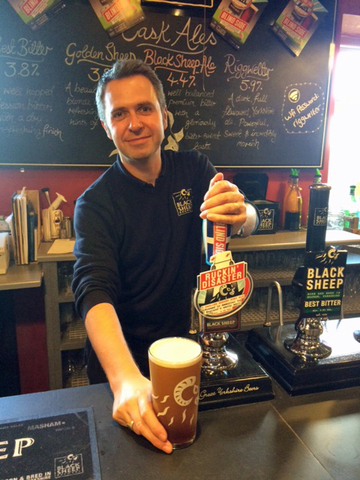