Black Sheep Brewery is brewing up a tribute to the sheep farming heritage of its home town, with a brand new seasonal ale, Shearer.

Masham, in North Yorkshire, is almost as well known for sheep as it is for beer.

The town boasts its own Masham breed of sheep, while the market square has historically seen up to 70,000 sheep sold a year, and the Masham Sheep Fair has been one of the most significant events in the local calendar for three decades.

Masham’s sheep farming heritage was also a key factor in the naming of Black Sheep Brewery, when it opened in 1992.

Shearer, a 4.1% full-bodied and zesty sharp, straw-coloured ale, brewed with citra hops and a hint of lemongrass, will be available for pubs on cask throughout November.

Rob Theakston, Managing Director of Black Sheep Brewery, said: “In the Masham area, we are well known for two things in particular, sheep and beer, both of which are traditions that have been passed down through the generations, not least with brewing in my own family.

“However, sheep farming is something that is not only peculiar to Masham, and the name, imagery and nod to the rural heritage is bound to find a warm welcome in bars across the Yorkshire Dales and other surrounding hill farming areas, such as County Durham. I suspect it might catch the eye on bars across Tyneside as well, but for more sporting reasons.

“Shearer has a great, citrusy flavour and a beautiful straw colouring, slotting nicely between our two Autumn and Winter amber ales, with the popular Blitzen returning for Christmas. It’s another great example of the way we can create fantastic new beers in our microbrewery and scale up to our original, larger plant.” 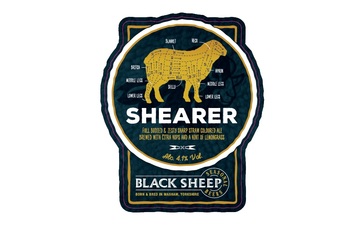