Black Sheep has the perfect resolution for the January blues

Black Sheep Brewery is aiming to banish the January blues and encourage pub customers to make a resolution to enjoy new experiences with the launch of its first seasonal beer for 2016.

Resolution, a ruby ale created in Black Sheep’s microbrewery in Masham, North Yorkshire, represents the innovation and use of high quality ingredients from cask beer producers that will encourage pub customers to try something different this month.

Highlighting the ‘Drink Quality Beer’ message on its specially-designed pump clip, Resolution is brewed with Cascade and Goldings hops. A 4.0% ABV beer, Resolution is available in pubs throughout January.

Rob Theakston, Black Sheep Brewery’s Managing Director, said: “While traditionally January is a quieter month for the pub trade, the launch of Resolution demonstrates our commitment to the industry help them provide something new and different for them to offer customers.

“Resolution is a quality pint and full of flavour. It’s definitely a reason for drinkers to get to their local and try something new.

“Enjoying a good pint shouldn’t be dictated by the month on the calendar. The only influence the date will have is the type of ingredients available, which means that throughout the year we can create a wide range of seasonal beers that will tempt the taste buds of customers.” 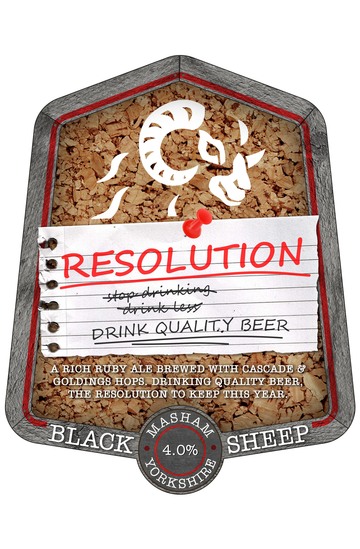