Black Sheep have their cake and eat it

Cupcake Dreams is a new business specialising in inventive and unique flavoured cupcakes and has developed a special recipe using Black Sheep Ale. Jo Williams, who owns the Hunton based business, has only been trading since the beginning of the year but admits the Black Sheep Ale cupcakes are one of her best sellers. After a comment from a friend, Jo, a former Executive Training Manager in Leeds, has turned her dream into a reality and now bakes cupcakes in her farmhouse kitchen using eggs from her own ducks and chickens. Jo provides a fantastic range of cupcakes, from the traditional chocolate and vanilla to more creative and aptly named ‘Cuptails’, which include Pina Colada, Strawberry Daiquiri and of course Black Sheep Ale flavour, to cater for any occasion. Jo Williams, owner of Cupcake Dreams said, “I’ve always wanted to work for myself and earlier this year I found an opportunity to take advantage of this. The cupcake business idea happened after a friend, who works as a McMillan Nurse, had a really bad day, so I made her some cupcakes to cheer her up. She enjoyed them so much she told me I should go into business and it began from there! “I received some business advice from Bedale Business Solutions and began attending shows such as The North Yorkshire County Show, The Wensleydale Show and The Bedale Show, which have all been really successful. The business is developing well with orders varying from birthdays, dinner parties and wedding cakes made entirely of cupcakes. I currently bake in my own farmhouse kitchen, but would love to own a shop, or maybe chain of shops n the future. “My father-in-law is an avid Black Sheep Ale fan and challenged me to make a cupcake with it, always one to rise to a challenge I set about devising a recipe! It seemed natural to use Black Sheep Ale as it not only has a fantastic taste but it is also a quality local product. They are one of my best-sellers when I attend county shows and the ale makes the cake rise beautifully.” Helen Allison, Marketing Manager at the Black Sheep Brewery, said: “I was a little sceptical when Jo told me that she had made cupcakes using Black Sheep Ale, however they are lovely and really tasty. The beer gives a fantastic aftertaste which works perfectly with the sweetness of the cake. Our staff all thoroughly enjoyed Jo’s Black Sheep Ale cupcakes, so much so that they are now available in the Black Sheep Bistro. “We are very proud that our ale is specifically used in local produce and it’s fantastic that these cupcakes are one of Jo’s best- sellers. We are really pleased to be doing business with Jo and I’m sure with her talent it will grow from strength to strength.” Black Sheep Ale cupcakes are now available in the Black Sheep Bistro, for more information go to www.blacksheepbrewery.com ENDS CONTACT: Melanie Smith on 01325 363436 Notes to Editors: The Black Sheep Brewery in Masham made its first beer in 1992 after being built up by Paul Theakston, whose family had brewed in the area for six generations. In a world of ever increasing bland, mass-produced beer Paul saw an opportunity to return to what his family had done best since 1827, making real beer in the time-honoured fashion. An old maltings building, once part of Lightfoot's Brewery became the Brewery’s home. This landmark building, which stands high over the banks of the Ure, had fallen in to disrepair as years of neglect as a semi-redundant grainstore had taken its toll. Paul assembled a small team around him to fight the rats and build a traditional country brewery. The Black Sheep Brewery name derived from Masham’s association with sheep, but ‘Sheep Brewery’ didn’t quite sound right, so with a little creativity from Paul’s wife the Black Sheep Brewery was born, a name that sat well with the area, spoke volumes about the maverick attitude to the multi-nationals seeking to dominate the brewing industry and captured the essence of the family struggle that led to our birth. Black Sheep Ale at 4.4% ABV, continues to maintain its presence among the top ten premium bottled ale brands, and is available nationwide from virtually all the major supermarket retailers. It is a classic premium bitter and as with all Black Sheep beers, full of character derived from the best possible brewing materials, plenty of time and patience in the brewing and our very special Yorkshire Square fermenters. Share 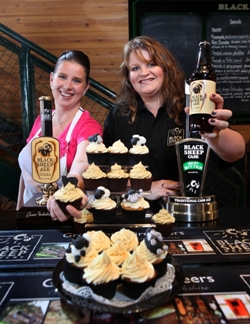