The spirit of the Tour de France lives on in Yorkshire for bikes and beer fan Jason Brant, after he rounded off the year as the winner of a prize draw launched as part of celebrations surrounding Le Grand Depart.

Black Sheep Brewery launched the competition in conjunction with Velo, its own special ale marking the summer’s cycling festivities, which has since become its most popular ever seasonal beer, and a permanent part of its bottled range.

Jason, from Upper Poppleton, near York, won the competition and rode away from the Masham Brewery on his prize, a top of the range Giant Defy 1 bike, donated by Ripon specialist bike shop Moonglu.

The bike was made to measure for Jason, and presented by Black Sheep Brewery’s Managing Director, Rob Theakston.

Rob said: “The Tour de France coming to Yorkshire was one of the biggest events ever to hit the region and reports say that it has been worth more than £100m to the local economy, with more to come. We decided to go all out to celebrate Le Grand Depart, and we still haven’t stopped.

“It was fantastic to be able to team up with Moonglu to offer this superb bike as a prize, along with a host of Black Sheep goodies. For Black Sheep, the success of Le Tour coming to Yorkshire will certainly live on, as we aim to bring the cask ale version of Velo back to pubs in 2015 to mark the Tour de Yorkshire.”

Prize winner Jason said: “I’m a fan of cycling, and a fan of Black Sheep’s range of beers, so there was no way I wasn’t taking part in the competition in the year when Le Grand Depart came to my home county. I’m delighted to have won and I’ll certainly be hitting the roads of Yorkshire on my new bike.”

Velo is available in bottles from the Black Sheep Brewery’s Sheepy Shop, both at the Visitor Centre in Masham and online at http://www.blacksheepbrewery.com/shop/ 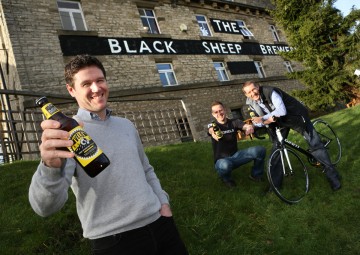