Black Sheep Brewery is strengthening its supermarket offering after securing a series of new listings with Morrisons for several of its newly-developed beers.

The Masham, North Yorkshire-based brewery has secured a deal with the Big Four supermarket chain that will see its first-ever lager, 54° North, join My Generation and newly-established brand, Flying Circus, on supermarket shelves.

Flying Circus, a 4.5% ABV amber ale created in collaboration with legendary comedy troupe, Monty Python, will be available in 500ml bottled format for the first time, having been scaled up from cask format, following its initial launch as a seasonal ale to pubs and bars in March.

My Generation, which is distributed through Black Sheep, completes the partnership, with the 4.7% ABV pale ale available in 660ml bottled format.

Jo Theakston, Sales and Marketing Director at Black Sheep Brewery, said: “We have enjoyed a longstanding relationship with Morrisons, and these latest listings further strengthens our ties with another strong Yorkshire brand. 54° North, which was enjoyed at the official bars at this year’s Tour de Yorkshire, will be a welcome sight on supermarket shelves, along with Flying Circus and My Generation, which make for more exciting additions to our bottled range.

“Our creative brewing team have continued to diversify and create new beers and we are delighted to have scaled up production of Flying Circus, which began life as a seasonal cask beer for the first time this year.” 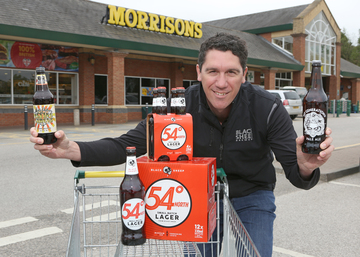