Black Sheep Brewery is continuing its longstanding affiliation with legendary comedy troupe Monty Python, with the launch of a ‘very silly’ seasonal ale.

The 4.5% ABV amber ale will be available in pubs and bars in the UK from 19 March to 4 May, and follows on from the pair’s most recent beer launch during Christmas 2016.

Brian, which is Monty Python’s first official Christmas beer, was created in homage to the 1979 film, Monty Python’s Life of Brian, and forms part of Black Sheep’s festive seasonal and bottled range.

The pair’s first collaboration was to celebrate Monty Python’s 30th anniversary, in 1999, and led to the creation of Holy Grail, which has grown to become one of Black Sheep’s most popular beers.

Flying Circus is brewed with First Gold, Galena and Amarillo hops, along with pale ale malt and crystal rye that gives it a red tinge.

Black Sheep officially launched the beer at The Flying Circus, in Newark, with proprietors Tony Yale and Andy Muirhead, who are trade customers of the brewery.

Jo Theakston, Sales and Marketing Director at Black Sheep Brewery, said: “As with Brian and Holy Grail, we are expecting Flying Circus to be a real talking point at the bar, as drinkers reminisce about and recite the classic lines from one of the world’s most iconic comedy troupes.

“Our Python-inspired beers have grown to become regular and permanent fixtures among our range, and we are expecting Flying Circus to be a hit among Black Sheep drinkers and all fans of Monty Python.

“We have enjoyed a longstanding partnership with Monty Python and there will be plenty of ‘sillyness’ and enjoyment during spring from our latest Python brew!

“It was only fitting that we officially launched the brew at its namesake pub, The Flying Circus!” 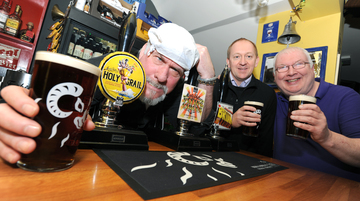