NEWS RELEASE: ISSUED ON BEHALF OF THE BLACK SHEEP BREWERY The Black Sheep Brewery has invested in a new transport and distribution centre to consolidate its operations. The Brewery has taken over the former Danby’s Foods factory on Fearby Road, to expand its facilities and operate more efficiently by bringing this side of the business back to the brewery’s home of Masham. The distribution centre was originally based in Well, near Bedale, due to the lack of space and restrictions on greenbelt land surrounding the brewery. It will now operate from the new premises adjacent to the main Brewery. In its 20th year the brewery has experienced some significant changes including Founder, Paul Theakston, taking on the role of Chairman and his son Rob Theakston stepping into the role of Managing Director. The brewery has built up an established name and produced several award winning beers resulting in 20 million pints sold throughout the UK and around the world. Progress, the brewery’s anniversary beer is now available on draught and in limited edition bottles available though the brewery’s website and visitors centre later this month. Rob Theakston, Managing Director at the Black Sheep Brewery, said: “We are delighted to be bringing our delivery trucks and warehouse facility home to Masham. We’ve been looking at relocating our distribution centre for some time, in order to operate from one main site, and Danby’s Foods warehouse becoming available was the perfect opportunity to move our facilities. “We have invested in new premises to keep services central and it’s great to have the entire team working from Masham again. Being our 20th anniversary this year it was the perfect time to make the move, highlighting that we are constantly investing and improving our services for customers.” For more information, visit www.blacksheepbrewery.com ENDS CONTACT: Melanie Smith on 01325 363436 Notes to Editors: Please note the Black Sheep Brewery has a new logo, if high res version is needed please download from: http://www.recognitionpr.co.uk/journalistarea-story.asp?id=11216 The Black Sheep Brewery in Masham made its first beer in 1992 after being built up by Paul Theakston, whose family had brewed in the area for six generations. In a world of ever increasing bland, mass-produced beer Paul saw an opportunity to return to what his family had done best since 1827, making real beer in the time-honoured fashion. An old maltings building, once part of Lightfoot's Brewery became the Brewery’s home. This landmark building, which stands high over the banks of the Ure, had fallen in to disrepair as years of neglect as a semi-redundant grainstore had taken its toll. Paul assembled a small team around him to fight the rats and build a traditional country brewery. The Black Sheep Brewery name derived from Masham’s association with sheep, but ‘Sheep Brewery’ didn’t quite sound right, so with a little creativity from Paul’s wife the Black Sheep Brewery was born, a name that sat well with the area, spoke volumes about the maverick attitude to the multi-nationals seeking to dominate the brewing industry and captured the essence of the family struggle that led to our birth. Black Sheep Ale at 4.4% ABV, now in an eco-friendly lightweight bottle, continues to maintain its presence among the top ten premium bottled ale brands, and is available nationwide from virtually all the major supermarket retailers. It is a classic premium bitter and as with all Black Sheep beers, full of character derived from the best possible brewing materials, plenty of time and patience in the brewing and our very special Yorkshire Square fermenters. Twitter: Tweet Facebook: Share 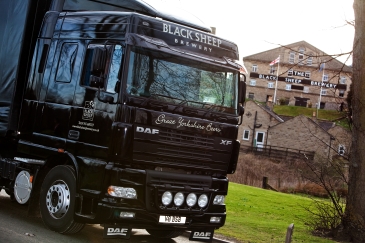