NEWS RELEASE: ISSUED ON BEHALF OF THE BLACK SHEEP BREWERY The Black Sheep Brewery has launched its new seasonal beer, All Creatures, at The Queens in Burley, North Yorkshire with the original James Herriot as a VIP guest. James Herriot is synonymous with the County and as part of the Brewery’s 20th anniversary celebrations, five pence from each pint of All Creatures sold will be donated to Herriot Hospice Homecare, which is also celebrating its 20th year in 2012. Christopher Timothy, who played the famous vet in the TV series of Alf Wight’s classic, All Creatures Great and Small, launched the limited edition beer. The seasonal beer has been specifically brewed for customers to enjoy throughout the spring months of March, April and May. All Creatures is a light and bright Yorkshire pale ale at 3.5%abv. The beer also boasts a hoppy kick by using a mix of Fuggle, Goldings and Bramling Cross, which compliments the refreshing flavours. With the introduction of All Creatures the Brewery is continuing to develop its seasonal range. Ruddy Ram was the first seasonal beer, introduced last year. It was designed for the winter months and consisted of a much darker porter beer, with a glowing red complexion. Jo Theakston, Director of Marketing for the Black Sheep Brewery, said: “We are delighted and honoured that Christopher was able to help us launch our new seasonal beer. All Creatures is a great limited edition beer brewed as part of our seasonal range. It encapsulates everything about spring, with its beautiful light colour and refreshing taste. We have produced a new pump clip that is unique to this seasonal beer. “We hope customers enjoy the diverse and varied options of limited edition seasonal beers being introduced by the Black Sheep Brewery. On top of our well established core range of beers it's been a great way for people to try something new from Black Sheep. “This year the Brewery is celebrating its 20th anniversary and it seemed a very fitting way to commemorate this by raising money for a charity which is associated with one of the greatest advocates of the Yorkshire Dales, James Herriot. We hope to raise as much money as possible for this very worthy cause, which helps people with life limiting illness’ throughout the areas of Hambleton and Richmondshire.” Liz Pollard Director of Herriot Hospice Homecare said: “We are absolutely delighted that the Black Sheep Brewery has chosen to support the Charity in this way and hope that All Creatures proves to be very popular!” All Creatures will be available from 1st March 2012 Christopher Timothy is currently appearing in The Diary of Anne Frank at York Theatre Royal, 17 Feb - 3 Mar 2012 ENDS CONTACT: Melanie Smith on 01325 363436 Notes to Editors: Please note the Black Sheep Brewery has a new logo, if high res version is needed please download from: http://www.recognitionpr.co.uk/journalistarea-story.asp?id=11216 The Black Sheep Brewery in Masham made its first beer in 1992 after being built up by Paul Theakston, whose family had brewed in the area for six generations. In a world of ever increasing bland, mass-produced beer Paul saw an opportunity to return to what his family had done best since 1827, making real beer in the time-honoured fashion. An old maltings building, once part of Lightfoot's Brewery became the Brewery’s home. This landmark building, which stands high over the banks of the Ure, had fallen in to disrepair as years of neglect as a semi-redundant grainstore had taken its toll. Paul assembled a small team around him to fight the rats and build a traditional country brewery. The Black Sheep Brewery name derived from Masham’s association with sheep, but ‘Sheep Brewery’ didn’t quite sound right, so with a little creativity from Paul’s wife the Black Sheep Brewery was born, a name that sat well with the area, spoke volumes about the maverick attitude to the multi-nationals seeking to dominate the brewing industry and captured the essence of the family struggle that led to our birth. Black Sheep Ale at 4.4% ABV, now in an eco-friendly lightweight bottle, continues to maintain its presence among the top ten premium bottled ale brands, and is available nationwide from virtually all the major supermarket retailers. It is a classic premium bitter and as with all Black Sheep beers, full of character derived from the best possible brewing materials, plenty of time and patience in the brewing and our very special Yorkshire Square fermenters. Twitter: Facebook: Share 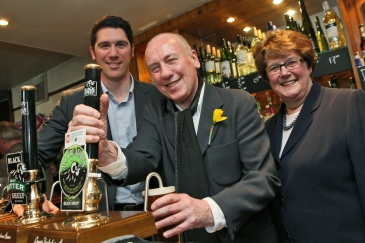