Black Sheep launches an ale and hearty beer for Christmas

Sleigh bells are ringing at Black Sheep Brewery with the launch of Blitzen, a festive ale brewed especially for the Christmas period.

Created in Black Sheep’s microbrewery, Blitzen is a quaffable ruby ale that will be available on cask throughout December. Bottled Blitzen is now available in the Sheepy Shop at the brewery and online, and in Booths, Tesco’s and Nisa from mid November.

Brewed with Cascade and Goldings hops, orange and mixed peel, Blitzen has chocolate and spice notes to create a taste and aroma which is distinctively Christmassy.

Blitzen, a 4.0% ABV beer, is the latest seasonal ale to come from the microbrewery, which is based in Black Sheep’s award winning brewery and visitor centre in Masham, Yorkshire.

Jo Theakston, Black Sheep Brewery’s sales and marketing director, said: “Blitzen is a cheeky Christmas surprise from Black Sheep Brewery. It’s a perfect match for Christmas pudding with lashings of brandy cream, but as it’s Christmas, we would recommend it is enjoyed with whatever accompaniment takes the drinker’s fancy.

“The microbrewery has proved a great success in allowing us to innovate with our beers, as well as create wonderful, short run specials such as Blitzen, and our most successful special to date, Velo, is now available in Tesco.” 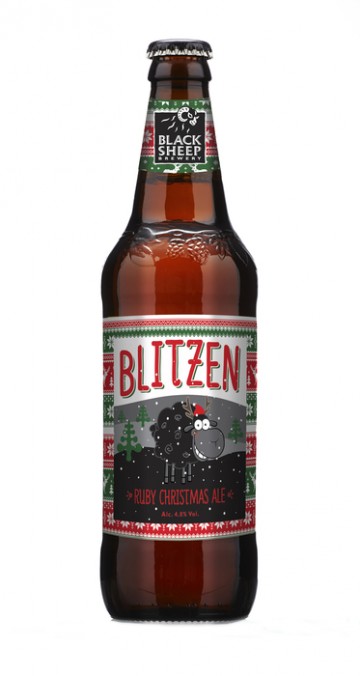