Black Sheep Brewery has unveiled ‘something completely different’ to mark the 50th anniversary of Monty Python – a special seasonal cask beer named in honour of the legendary comedy troupe.

The beer, ‘Monty Python’s Flying Circus’, is available throughout September and October to coincide with two months of celebrations of five decades of hilarious sketches and cult movie classics.

Brewed in Masham, North Yorkshire using a blend of pale ale malt and crystal rye along with hops of First Gold, Galena and Amarillo, the 4.5% ABV beer has been developed as part of Black Sheep’s exclusive brewing collaboration with the Pythons and completes a trio of Black Sheep beers inspired by John, Michael, Eric, Graham and the two Terrys.

And, as this is a very special occasion, Black Sheep is also re-releasing ‘Brian’, the beer named after the 1979 film, for two months to ensure that, along with its year-round hit, ‘Monty Python’s Holy Grail’, all three cask beers will be available in pubs across the UK this autumn.

The beers are part of a raft of Monty Python anniversary celebrations, which includes a BBC takeover and release of never before seen archive footage as well as a British Film Institute season in London where visitors will be able to enjoy bottles of Black Sheep’s ‘Flying Circus’ and ‘Holy Grail’ throughout September.

In addition to offering customers a flavour of Monty Python, Black Sheep is also helping pubs spark laughter and hilarity by developing a seven-round Python-themed quiz, including a picture round featuring some of the TV show’s and movies’ best-known and perhaps more obscure characters!

Pub goers will also be encouraged to wear Python-themed fancy dress for the quiz nights and send photos to Black Sheep with the best picture winning a unique signed Monty Python plaque.

Rob Theakston, Managing Director at Black Sheep Brewery, said: “While the parrot may be dead, Monty Python is alive and kicking and it's fantastic to be able to support the 50th anniversary with the release of our commemorative ‘Flying Circus’ beer.

“We’re very proud of our long and exclusive relationship with the Pythons and having all three of the beers we developed with them available together for the first time is a great way to mark this momentous occasion.

Rob added: “Discussing classic comedy sketches and catchphrases are a staple of pub conversations and they’ll be dominated this autumn by the sound of the lumberjack song, ‘nudge, nudge, wink, wink’ and of course, ‘he’s not the Messiah, he’s a very naughty boy’! Together with our commemorative quiz, the pub will be the place to celebrate all things Monty Python!”

For details of all the other Monty Python 50th anniversary events and special releases, and to buy exclusive anniversary merchandise, visit http://www.montypython.com/ 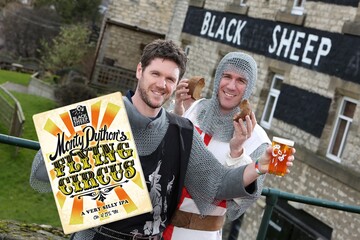