Black Sheep Brewery is preparing to roll out its first-ever lager to the off-trade with the launch of 54 Degrees North as a bottled alternative.

The premium small batch craft lager will be available in 4 x 330ml bottled format initially at the North Yorkshire-based brewery’s award-winning Visitor Centre as well as on its website – four months since it was launched on draught, in July 2017, as part of Black Sheep’s 25th anniversary year celebrations.

It is officially endorsed by leading British mountaineer and explorer, Alan Hinkes OBE, who is the only Briton to have climbed all fourteen of the world’s 8,000m peaks.

Jo Theakston, Sales and Marketing Director at Black Sheep Brewery, said: “The launch of 54 Degrees North and our first lager was a major signal of intent and its popularity has really come on strong since July. We are delighted to be in a position to scale up production and offer it as a bottled alternative to drinkers as we look to build-on and secure relationships with off-trade partners.

“It is another cause for celebration in our 25th anniversary year and demonstrates our ability to diversify and bring something new to the lager market.”

Jo added: “54 Degrees North exemplifies the Black Sheep story and adventure perfectly, and crucially pays tribute to our hometown which is a major part of who we are and our story.” 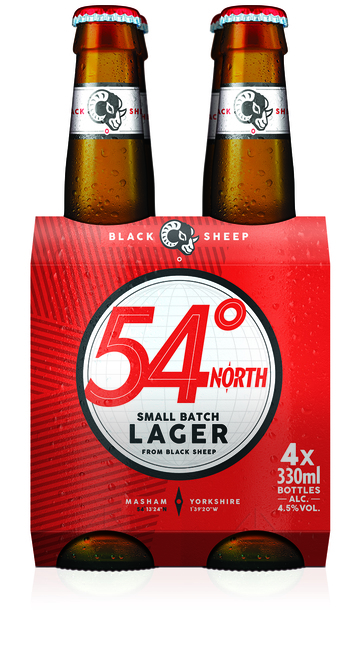