Black Sheep Brewery has restarted production of cask beer in Masham, in anticipation of the proposed opening of pubs in July following a near three-month closure as a result of Covid-19.

The brewery has restarted its cask ale production with 100 barrels of its iconic Yorkshire bitter, Black Sheep Best Bitter, one of the UK’s bestselling cask session beers, which will be ready in time for the long-awaited reopening of pubs.

The beer, which takes approximately ten days to brew, will be the first of many casks being produced at the brewery as it looks to support the reopening of many food and drink establishments across the country.

While pubs have been closed and cask brewing operations paused, Black Sheep has focused its activity on supporting the local community with beer and food deliveries along with online sales, which have seen a 2000 percent increase since 21st March, compared to the same time last year.

Following the lifting of lockdown restrictions, the Black Sheep Brewery Visitor Centre Shop has also reopened its doors on 8th June. Customers can now visit the shop for takeout beer, Black Sheep merchandise and accessories from 12pm between Wednesday and Sunday each week.

Charlene Lyons, Chief Executive of Black Sheep Brewery, said: “The reopening of pubs has been much anticipated for both the public and businesses. With the estimated date not too far in the future, I’m pleased to say that we are back in production, starting with one of our most loved beers.

“Following strict social distancing and hygiene measures, the team are back on the floor and the first cask has been fired up, and we’re gearing up stocks to serve pubs across Yorkshire and further afield.” 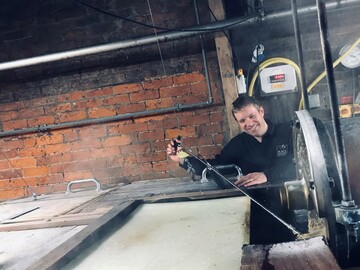