Black Sheep raises a glass to its latest brewing apprentices

The Black Sheep Brewery is focused on the future with the arrival of two new apprentices.

Matt Hunter, 19, and Jacob Slater, 23, are embarking on a Diploma in Proficiency in Brewing and Industry Skills – which represents a departure in the brewer’s traditional working methods.

Those involved in the production process were historically trained to carry out a specific career-long task, but the Masham-based brewer, through its apprenticeship scheme, is providing its latest recruits with a comprehensive range of skills and industry knowledge.

Matt, from Leeds, and Jacob, originally from Bath, will be trained in every aspect of the brewing process – from the use of ingredients to flavour, laboratory work to quality assurance.

This not only widens their skill base by giving them a much greater depth of knowledge, but benefits the business by making it and their staff more responsive to developing trends within the industry.

Once the pair have completed their apprenticeships, there will be an opportunity to progress further by enrolling for a General Certificate in Brewing followed by a Diploma in Brewing and even the highest qualification in brewing, The Master Brewer.

Black Sheep welcomed its first two apprentices in 2015, who also completed the Diploma in Proficiency in Brewing and Industry Skills.

One has since left the company, but is still working in the brewing industry, while the other, Nick Norris, has progressed to become a leading member of the production team.

A third apprentice, Lewis Petfield, 25, of Northallerton, recently completed his Level 3 Diploma in Electrical and Electrical/Electronic Engineering and is now a valued member of the engineering team.

Jo Theakston, Sales and Marketing Director at The Black Sheep Brewery, said: “We are delighted to welcome our two latest apprentices as they will become an integral part of moving this business forward and achieving future success.

“Brewing beer is both a family tradition and a passion and Matt and Jacob will become well versed in a wide range of traditional skills as well as gaining an insight into more modern brewing methods, which includes areas such as hygiene and research.

“We are keen for our apprentices to progress through the business and continue to develop their expertise to the highest level to keep Black Sheep innovative and responsive and at the forefront of the brewing industry.” 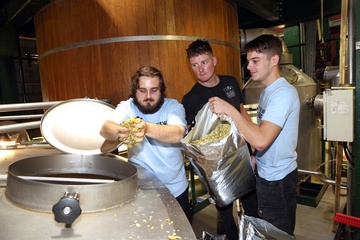