Black Sheep Brewery has reopened its brewery shop in its Visitor Centre in Masham following the lifting of lockdown restrictions.

Customers can now visit the shop for takeout beer, Black Sheep merchandise and accessories from 12pm between Wednesday and Sunday each week.

To ensure the safety of its staff and customers Black Sheep has implemented comprehensive social distancing and hygiene measures. A queuing system will be in place at the entrance with restricted numbers of customers in the shop at any one time.

Alongside the reopening of the brewery shop, Black Sheep is continuing to deliver food prepared in its Visitor Centre kitchens to customers in the local area as well as maintaining its hugely popular beer delivery service, which has expanded beyond the towns and villages around Masham to locations such as Leeds and York

Its online shop is also continuing to experience high levels of demand from customers throughout the UK for its collection of beers, hand crafted gin, and lager along with a range of gift packs and hampers.

Charlene Lyons, Chief Executive of Black Sheep Brewery, said: “We’re really excited to be able to welcome people back safely to the brewery with the reopening of our shop.

“There is plenty of space to ensure social distancing and we have all the hygiene measures in place so our customers can enjoy the experience of choosing their favourite Black Sheep products. Our customers have been exceptionally supportive of the brewery throughout this period and it will be great to see some of them back in Masham.” 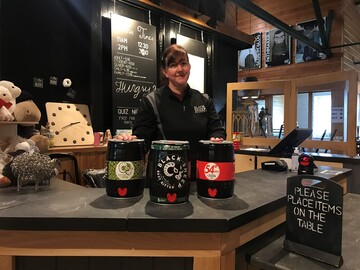