Black Sheep Brewery has unveiled a new look to its award-winning Visitor Centre, following a major refurbishment at the Masham-based brewery.

Black Sheep utilised the services of local tradespeople to carry out the work at the Visitor Centre, as well as a number of the brewery’s employees.

The bar area has been updated with a ‘craft keg beer wall’ and a revamped seating/lounge area, which has created more of a modern pub setting.

New furniture, including tables, chairs and sofas, has been fitted to offer a relaxing environment alongside the bistro, with large ‘bottled light boxes’ comprising of clear Black Sheep bottles, adding to the setting.

A lounge area has also been created on the mezzanine, with the bistro and Sheepy Shop revamped, following the investment.

It is estimated that 30,000 people descend on Masham each year to visit the Black Sheep Brewery Visitor Centre.

In 2016, it was awarded a TripAdvisor Certificate of Excellence, which celebrates hospitality businesses that have earned consistently positive reviews on TripAdvisor.

Last year, Black Sheep was named the British Beer & Pub Association’s (BBPA) Beer Champion 2017, in its silver anniversary year, in recognition of its commitment to supporting the pub industry.

Jo Theakston, Sales and Marketing Director at Black Sheep Brewery, said: “This is a significant investment for Black Sheep that further strengthens our offering at the Visitor Centre, which has grown to become a major attraction in Yorkshire. Flocks of people visit the brewery every year and the refurbishment has given the Visitor Centre a modern facelift, while maintaining our strong values as a traditional, independent brewery, since it was built more than 25 years ago.

“Everyone ranging from local tradespeople and our team have worked extremely hard to revamp the Visitor Centre, as we look to build on the success it has enjoyed over the years. Black Sheep is a major employer in Masham, so we are hoping to attract even more people to the Visitor Centre and make it a much more focal point in the town where guests can enjoy a meal, have a pint with friends or use our space for meetings and social gatherings.” 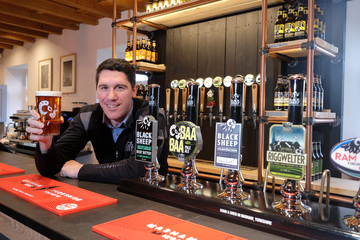