Black Sheep Brewery has announced a national listing with Tesco that will see several of its newly developed brands available on supermarket shelves for the first time.

The North Yorkshire-based brewery has secured exclusive listings with the UK’s number one supermarket chain for new releases Venus & Mars, Milk Stout and My Generation Pale Ale, as well as 54° North – the company’s first-ever lager.

Venus & Mars and Milk Stout will be available in 500ml bottled format, with My Generation being scaled up to 500ml bottles for the first time.

Milk Stout, a 4.4% ABV creamy stout with notes of chocolate, vanilla and coffee, has been scaled up to bottled format for the first time.

My Generation is distributed through Black Sheep and is brewed from an exciting blend of new world hops including Cascade, Galena, Magnum and Polaris. The 4.7% ABV beer was previously only available in can and 30L keg formats.

Jo Theakston, Sales and Marketing Director at Black Sheep Brewery, said: “The launch of our first lager, 54°North, was a defining moment for Black Sheep and securing this exclusive partnership with Tesco is another significant moment for us.

“We are delighted to be working with the UK’s number one supermarket chain to drive our new brands forward as we continue to diversify and brew a range of beers that can be enjoyed in the comfort of the home, as well as in pubs and bars. Our newest brews together with existing, established brands will make for some exciting additions to supermarket shelves.”

Dom Hill, Head of Lager at Tesco, said: “We are excited to be working closely with the team at Black Sheep, especially on 54° North. We are confident our customers will enjoy the new range of beers and find the perfect one whatever their tastes.” 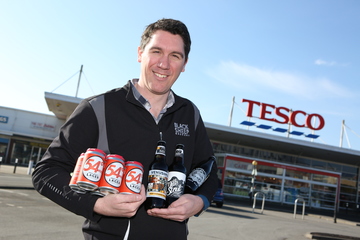