Black Sheep Brewery plc has completed one of its most transformative business periods by delivering a second successive year of profits and increased turnover.

The Masham-based brewery has established a dedicated retail division and continued its investment programme in a state-of-the-art packaging facility, alongside developing its established and new beer and lager range.

The development of its retail arm, coupled with developments in its leadership team, including the appointment of Simon Adams as Group Finance Director, who brings private equity and AIM-listed experience to the group, highlights the ambition of Black Sheep Brewery to develop and diversify to build a sustainable and profitable business.

Further investment is being made in the construction of a state-of-the-art packaging plant on its site at Fearby Road in Masham, with the Company having already invested £200k in capital equipment for the plant, in addition to receiving grant funding from the Local Enterprise Partnership. The facility will enable Black Sheep to bring its can, keg and bottle packaging operation in-house, which will not only bring a significant reduction in costs, but also increase flexibility to supply customers.

The Brewery’s reputation was also strengthened by its partnerships with major retailers, including securing listings for a number of its beers with supermarkets including Morrisons and Tesco. It also won a series of awards in the period in the National Independent Beer Awards and the World Beer Awards for both its new beers and also some of the established core range.

“Our diversification into pub ownership and to develop packaging capabilities to supplement our core brewing activity is proving to be a positive strategy. Brewing continues to be a challenging industry in which to operate, which is exemplified by the suffocating levels of beer duty we pay, accounting for 40 percent of our turnover. However, we remain agile and proactive through the development of new products and programmes of investment that will enable the brewery to continue to move forward.

“Working with our loyal shareholders and pursuing new routes to fundraising for the business, we are committed to the fast pace of change we are delivering at Black Sheep Brewery that will ensure we bolster our position as an iconic Yorkshire brand and innovative and creative brewer.” 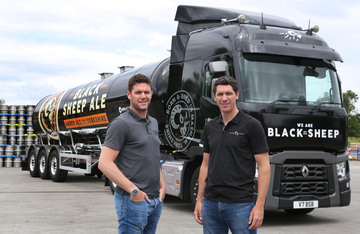