NEWS RELEASE: ISSUED ON BEHALF OF THE BLACK SHEEP BREWERY The Black Sheep Brewery has said ‘bon voyage’ to a barrel of its finest Imperial Russian Stout as it sails to the Western coast of Russia on a special summer voyage using trade routes from a Golden age of shipping to demonstrate the export potential of British Ale. The ‘Great Baltic Adventure’ set sail from Greenwich after a bustling launch party attended by the Deputy Mayor of Greenwich. The boat, a 60ft former round-the-world Clipper, will re-trace an 18th century trade route, when a strong version of British porter, a dark, rich beer, was shipped to Russia where it was a great favourite with Empress Catherine the Great and renamed Imperial Russian Stout. A ‘pin’ (four and a half gallons) of Black Sheep Imperial Russian Stout has been loaded on board, along with other versions of the stout made by 11 different Brewers from the UK. The route involves a journey across the North Sea and the Baltic Sea, stopping at Denmark, Sweden and Finland before arriving in St Petersburg on June 18. Paul Theakston, Managing Director and Brewer Phil Douglas of Black Sheep Brewery, will be joining the crew for a leg of the journey from Stockholm to Helsinki. On arrival the stout will be sampled by a panel of judges, who will announce an overall winner. One of Black Sheep’s Traditional Yorkshire Square fermenting vessels made from slate was brought out of retirement to help with the fermentation of Black Sheep’s unique stout. Brian Smith, Director of Sales at the Black Sheep Brewery said, “Our head brewer really rose to the challenge when we asked him to produce an Imperial Russian Stout. He has produced a wonderful beer which is 8.5% alcohol content, you have to drink it very carefully and give it a lot of respect.” “Black Sheep Brewery got involved, because it’s something different and exciting. We always try to be innovative and try to come up with new ideas and this journey just really grabbed us as something that stood out.” Tim O’Rourke, the event organiser from Brilliant Beer said, “The reason we are undertaking this voyage is to recreate a historical passage, which is an old export route between the UK and Russia. We will be taking Imperial Russian Stout from the UK, which hasn’t really been done since the 1800’s when there was a major export of beer between the UK and Russia. “We hope it will be a good demonstration of the opportunities there are for British ale in export markets such as Scandinavia and Western Russia. “The first thing we hope to achieve is to arrive there safely and for everybody to have a really good time. We are also about trying to promote British ales particularly into lucrative markets. We hope this will increase consumer awareness at our beer festivals, which we are running at different locations along the route.” Cllr Jim Gilman, Deputy Mayor of Grenwich said, “The Brewers concerned really are quality brewers and I think the Russians will see this. I hope that after a chance to sample it, they will recognise this and hopefully this will become a new and expanding market for us.” ENDS CONTACT: Melanie Smith on 01325 363436 Notes to editors: The Black Sheep Brewery in Masham brewed its first beer in 1992 after being set up by Paul Theakston, whose family had brewed in the town for six generations. In a world of ever increasing bland, mass-produced beer Paul saw an opportunity to return to what his family had done best since 1827, making real beer in the time-honoured fashion. An old maltings building, once part of Lightfoot's Brewery became the Brewery’s home. This landmark building, which stands high over the banks of the Ure, had fallen in to disrepair as years of neglect as a semi-redundant grainstore had taken its toll. Paul assembled a small team around him to fight the rats and build a traditional country brewery. The Black Sheep Brewery name derived from Masham’s association with sheep, but ‘Sheep Brewery’ didn’t quite sound right, so with a little creativity from Paul’s wife the Black Sheep Brewery was born, a name that sat well with the area, spoke volumes about the maverick attitude to the multi-nationals seeking to dominate the brewing industry and captured the essence of the family struggle that led to our birth. Black Sheep Ale at 4.4% ABV, now in an eco-friendly lightweight bottle, continues to maintain its presence among the top ten premium bottled ale brands, and is available nationwide from virtually all the major supermarket retailers. It is a classic premium bitter and as with all Black Sheep beers, full of character derived from the best possible brewing materials, plenty of time and patience in the brewing and our very special Yorkshire Square fermenters. Twitter: Facebook: Share 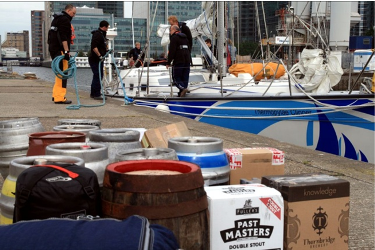