The stars are aligned at Black Sheep Brewery as it celebrates further accolades in its 25th anniversary year at The Beer Awards 2017.

Five of the Masham-based brewery’s beers were recognised at the awards, including Pathmaker, a brew named in honour of Black Sheep’s founder, Paul Theaskton, which received Four Stars, while Black Sheep Ale, Riggwelter, Choc & Orange Stout and My Generation were awarded Three Stars.

Launched in 2016, The Beer Awards highlight exceptional canned and bottled beers using a rigorous judging method built on taste, as well as testing levels of alcohol, bitterness and colour.

The recognition at The Beer Awards builds on Black Sheep’s triumphs at the World Beer Awards in the summer, where it won four accolades. Choc & Orange Stout was the UK winner in its category, while Riggwelter, Black Sheep Ale and My Generation took home Gold, Silver and Bronze medals, respectively.

Additionally, Black Sheep was recently named Beer Champion 2017 by the British Beer & Pub Association (BBPA) in recognition of the range of activities Black Sheep organised to celebrate its 25th anniversary, including the development of new seasonal and permanent beers to its range.

Jo Theakston, Sales and Marketing Director at Black Sheep Brewery, said: “Our anniversary year has continued to deliver more success and credit must go to our creative brewing team who continually produce great tasting beers that are enjoyed by so many drinkers across the UK.

“The Beer Awards bring together many of the big names within the industry so it is refreshing to see that our brews have been so well-received by the respected judging panel. It’s always nice to fly the flag of Yorkshire at national, industry awards, and we may have to make further room on our mantelpiece to accommodate this latest success!” 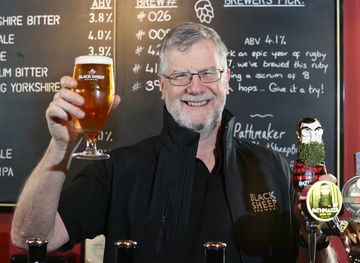