The Black Sheep Brewery’s trademark Best Bitter has entered the UK’s top five cask ales by becoming the 4th highest rated cask ale on the ‘Hot to Stock’ list by the industry’s bible, The Publican’s Morning Advertiser. Best Bitter came in at number 31 overall on the list which showcases the drinks stocked in the highest number of pubs or have had a significant increase over the course of the year. ‘Hot to Stock’ is compiled for pubs that don’t just want to offer long-established brands, but also aim to offer exciting new drink brands that are currently trending throughout the UK. The consultancy, CGA Strategy, helps to compile the list of brands that appear outside the generic ‘must-stock’ group. Black Sheep Best Bitter is the Brewery’s best selling beer on cask and has moved up three places since appearing last year in the overall top 50 ‘Hot to Stock’. Jo Theakston, Director of Marketing at the Black Sheep Brewery, said: “We are extremely proud to be named on this influential list and to move up three places from last year is even better. More and more people are turning to the quality of flavour and choice in cask beer and we are proud to be leading the way in this vibrant part of the industry. “We brew Best Bitter with the best quality raw materials and ferment using the unique Yorkshire Square system which gives the beer its classic Bitter flavour and dry and refreshing Black Sheep finish. We were also the first to market with our innovative illuminated Best Bitter handpump, which has really established itself well over the last year. “It’s fantastic to have The Publican’s Morning Advertiser acknowledge this and regard our Black Sheep Best Bitter so highly.” Ends Notes to Editors: The Black Sheep Brewery in Masham made its first beer in 1992 after being built up by Paul Theakston, whose family had brewed in the area for six generations. In a world of ever increasing bland, mass-produced beer Paul saw an opportunity to return to what his family had done best since 1827, making real beer in the time-honoured fashion. An old maltings building, once part of Lightfoot's Brewery became the Brewery’s home. This landmark building, which stands high over the banks of the Ure, had fallen in to disrepair as years of neglect as a semi-redundant grainstore had taken its toll. Paul assembled a small team around him to fight the rats and build a traditional country brewery. The Black Sheep Brewery name derived from Masham’s association with sheep, but ‘Sheep Brewery’ didn’t quite sound right, so with a little creativity from Paul’s wife the Black Sheep Brewery was born, a name that sat well with the area, spoke volumes about the maverick attitude to the multi-nationals seeking to dominate the brewing industry and captured the essence of the family struggle that led to our birth. Black Sheep Ale at 4.4% ABV, continues to maintain its presence among the top ten premium bottled ale brands, and is available nationwide from virtually all the major supermarket retailers. It is a classic premium bitter and as with all Black Sheep beers, full of character derived from the best possible brewing materials, plenty of time and patience in the brewing and our very special Yorkshire Square fermenters. Share 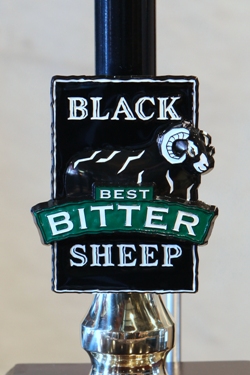