Greg Mulholland MP has joined one of Yorkshire’s most iconic businesses in supporting a popular Otley festival in its landmark 25th year.

The Otley Black Sheep Folk Festival will see a host of local, national and international musicians descend on the town between 16-18 September for the three-day long event.

The line-up, which includes Du Temps Antan, The Churchfitters and Lucy Ward, was unveiled at the Otley Beer Tap Inn by Greg Mulholland, the MP for Leeds North West, Paul Theakston, chairman and founder of Black Sheep Brewery and Steve Fairholme, the festival’s organiser.

It will also see the reunion of many of the original acts who performed at the inaugural Otley Folk Festival in 1991, including Stanley Accrington, Robin Garside, Dave Vermond, Last Orders and Tanglefoot.

Black Sheep Brewery will continue as the festival’s main sponsor, which it has supported ever since its formation in 1992 – a year after the festival was launched.

Jo Theakston, Sales and Marketing Director at Black Sheep Brewery, said: “We have enjoyed an excellent relationship with the festival for 24 years and are delighted to show our support once again. It is shaping up to be another fantastic celebration in Otley and will offer a vibrant atmosphere for locals and visitors to Yorkshire throughout the weekend.”

Steve Fairholme said: “It has been a privilege to have been involved with the Otley Black Sheep Folk Festival for all of its 25 years. This great, small town festival has grown and developed and it is fitting that we celebrate our 25th anniversary along with our main sponsor Black Sheep Brewery.”

Greg Mulholland MP said: “The Otley Black Sheep Folk Festival has grown to become a permanent fixture in the town’s social calendar and one which everyone in Otley looks forward to. I am delighted to be involved with the festival once again, especially in its 25th year, and I am looking forward to the celebrations in September.” 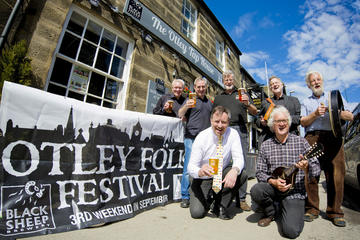