The Black Sheep Brewery’s best-selling seasonal ale is to make a welcome return to coincide with the 2019 Tour de Yorkshire.

Velo, Black Sheep’s ‘freewheeling’ pale ale, will return to pubs across the UK throughout April and May ahead of the event (2-5 May 2019).

Launched in 2014 ahead of Le Grand Depart, Velo is a 4.2% ABV ale brewed with Cascade hops and a subtle hint of orange and coriander, which produces a flavoursome pint with a refreshing citrus edge.

The Masham-based brewery is the Tour de Yorkshire’s official beer after agreeing a partnership with the event’s organisers, Welcome to Yorkshire, in 2018.

Last year’s race boosted the regional economy by £98m, according to a study by GRASP and Leeds Beckett University. Riders also passed through 170 villages, towns and cities across the county, with more than 2.6m spectator on the roadside and 12.5m TV viewers.

Black Sheep will also be backing the pub trade with the return of its ‘pub peloton’ – a group of pubs that are located on or near the route, which will receive themed Tour De Yorkshire outlet support by Black Sheep through a series of initiatives to help drive footfall over the course of the event.

Jo Theakston, Sales and Marketing Director at Black Sheep Brewery, said: “Since Le Grand Depart navigated the roads of Yorkshire and passed by our brewery in 2014, the legacy that the Tour created has had a lasting impact on us here at Black Sheep.

“Velo has grown to become one of our most popular brands and its return coincides with this year’s Tour de Yorkshire, offering people the perfect pint to enjoy while basking in the spring sunshine.”

Peter Dodd, Commercial Director at Welcome to Yorkshire, said: “We’re delighted Black Sheep are on board again as the official beer for the 2019 Tour de Yorkshire and that Velo pale ale will soon be back in pubs across the county.

“We always say, the event is so much more than a bike race. As well as showcasing Yorkshire to the world it’s a great opportunity for both communities and businesses to come together to proudly celebrate the county. And what better way to start the party than with some fantastic Yorkshire food and drink of which Velo ale is undoubtedly a first-class example.”

Jo added: “Cycling has benefited the UK significantly in recent years and the region received a massive economic boost in 2018, as a result of the Tour de Yorkshire. We are proud to be associated with the event as its official beer and can’t wait to see what this year’s race brings.” 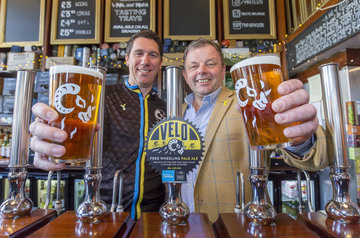